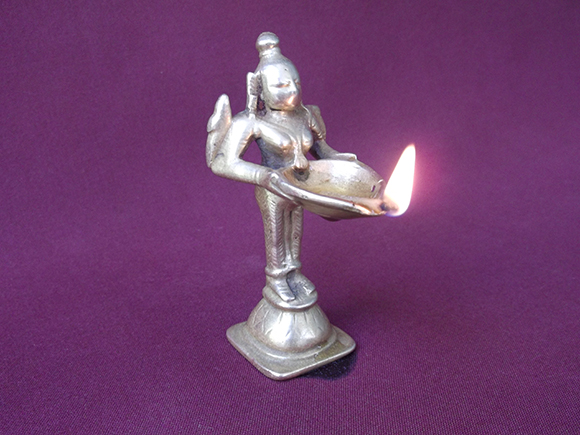 Gaja in Sanskrit means Elephant, and Diya is an oil lamp with a wick. This oil lamp is crafted to show an Elephant carrying a diya on its back. 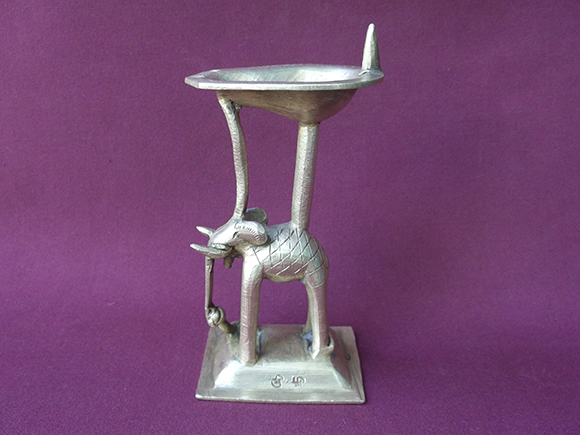 It is customary that Gods, Kings and Dignitaries sit in a howdah placed on a caparisoned Elephant. They do not sit directly on the back of the Elephant. In this picture showing Gaja diya, the diya is not placed directly on the back of the Elephant but is placed on an elevated place representing howdah and there is caparison design on the back of the Elephant. Diya in Hindu mythology is very sacred and equivalent to Goddess Lakshmi and hence given such an elevated position in this Gaja diya. Gaja and Lakshmi have a strong association in Hindu mythology. Airavata, the first elephant, and Goddess Lakshmi, both have emerged from the celestial milky ocean (Samudra madhanam) when Devatas and Asuras churned it for getting Amrut, the nectar that gives eternal life. 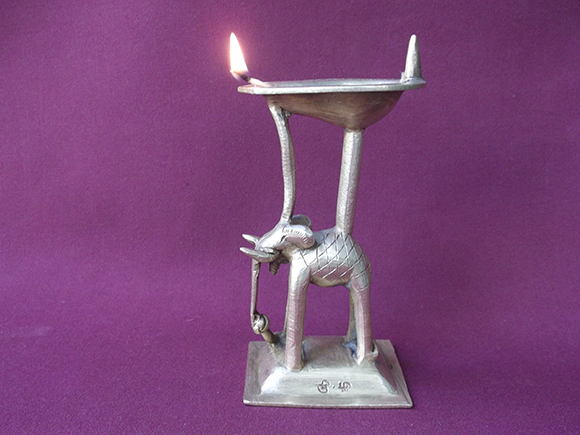 In Hindu mythology, Lakshmi is worshipped in eight forms (Ashta Lakshmi) and one of her aspect is known as Gajalakshmi. In Gajalakshmi form, she is seated on a Lotus flower flanked on either side by Elephants performing Abhishekam (sprinkling water on the Goddess) with their raised trunks. 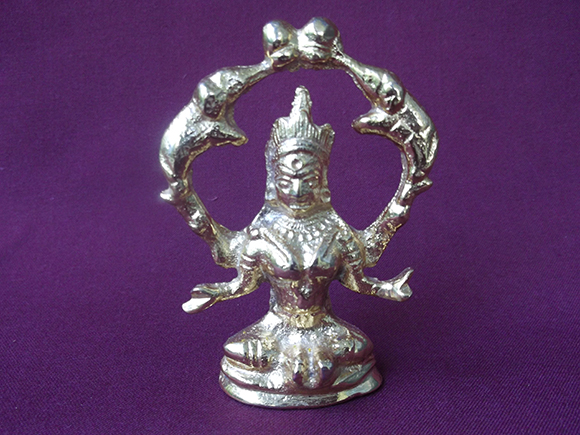 Elephant has lot of significance in Hindu mythology. Airavat, the white elephant (the first of the elephant species) that emerged from the milky ocean is the mount of Indra, the chief of Devas. There is another version of the creation of Airavat that says it has come out of the egg shell in the right hand of Brahma followed by seven more Elephants that are called Ashta Dig-gajas who guard the eight directions of the universe. An Elephant represents abundance, fertility, richness, boldness, strength, wisdom, and royalty, and its presence in the house even in the form of a picture or sculpture or an object of art will bring prosperity in the house.

This antique exquisite creation of Gaja diya was designed and crafted taking into consideration all positive aspects of Gaja and Lakshmi to bring prosperity to the house in which it is used. 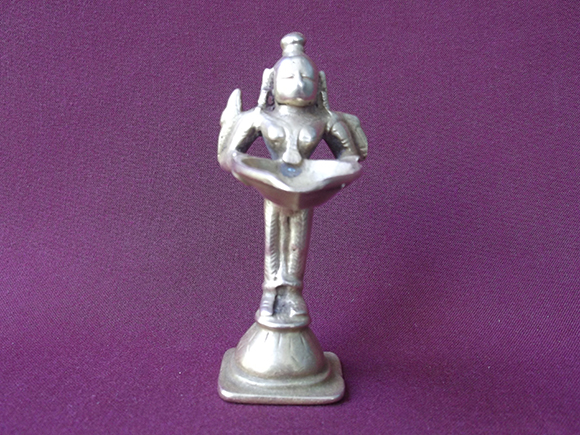 Deepa sundari (Deepa means the flame from the lamp and Sundari means the beautiful lady).Thus, the Deepa Sundari Diya depicts the beautiful lady holding the diya. Deepa Sundari figure made out of brass is really beautiful with well-proportioned body and a long and well-adorned hair plaited upto the hips. Part of the hair is dressed like a bun on the top of her head and the other part of the hair is woven into a charming long plait resting on her hips.

The features on the face and some of the body parts are smoothened due to continuous usage, cleaning, and antiquity. This Deepa Sundari idol is there in our family since more than 5 generations and is estimated to be more than 100 years old. Since any idols that do not have clear and sharp features are not merited to be kept in the pooja, this Deepa Sundari has come into my antique collection from our pooja room. 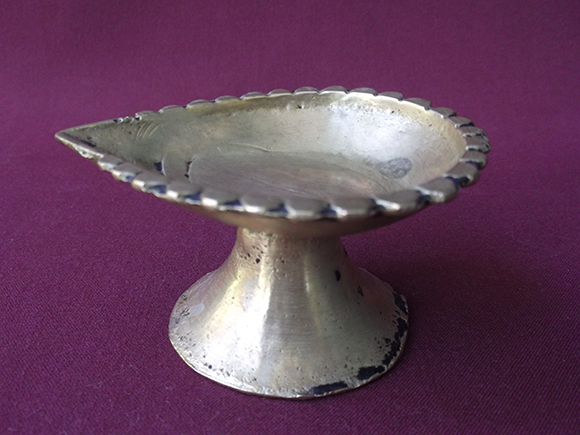 This is an enchanting design of Oil diya. It has a solid base to support the oil cup. The upper part of the oil lamp is in oval shape instead of the typical round shape with a long snout to hold the wick. The base is in a round shape tapering and joining the cup. The joint near the oil cup is deliberately kept narrow so that the user can slip the fingers around the narrow neck of the diya and the cup of the diya rests on the palm of the user for safe handling and to prevent the spillage of oil. The rim of the cup has a design to give some aesthetic appeal to the diya. 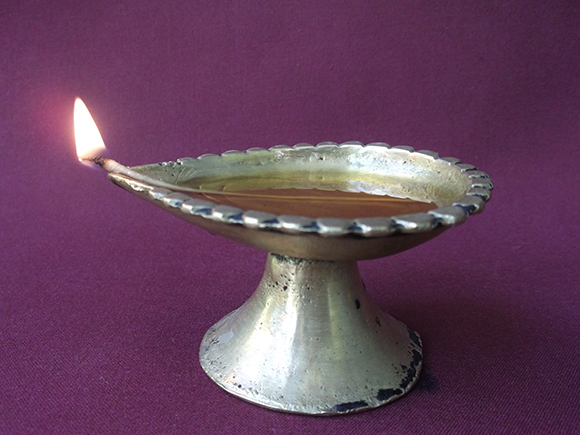 This diya is used in our pooja room since 5 generations. My paternal grandfather’s mother -in-law had brought this diya from her family to our grandfather’s family. She had only one daughter and after the death of her husband she moved into her daughter’s house (that is my grandfather’s house) with all her belongings including this enchanting diya. From my grandfather, it had come to my father and from there to me. This diya was used in our family prayer room from generations in order to light a long cotton wick filled with Til (sesame seeds) oil. 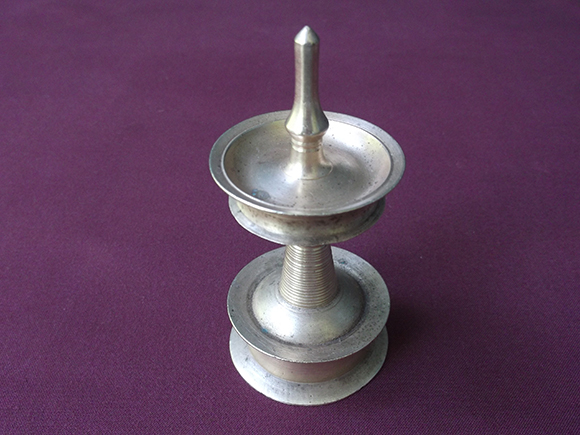 This is a typical Kerala bronze oil lamp. Kerala is a state in South India and is famous for temples and brass oil lamps. Kuthu Vilakku has robust design with a solid round base and an oil cup of the same shape and size. Both the base and oil cup are joined with a long rod with ring like grooves throughout the length of the rod to provide a strong grip for handling. 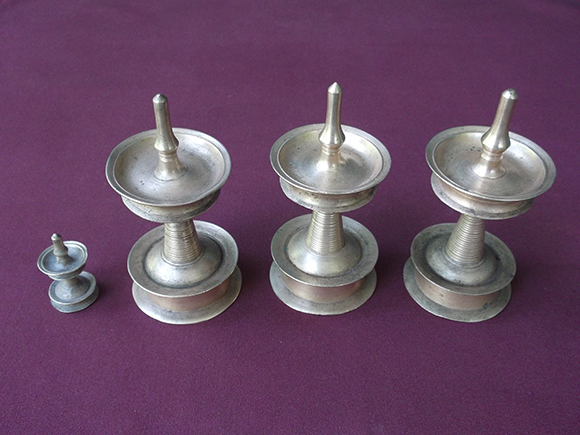 Even if oil spills by chance, these grooves provide the strong grip against slippery oil. No snout is provided to the oil cup thus giving the freedom to keep any number of wicks anywhere. 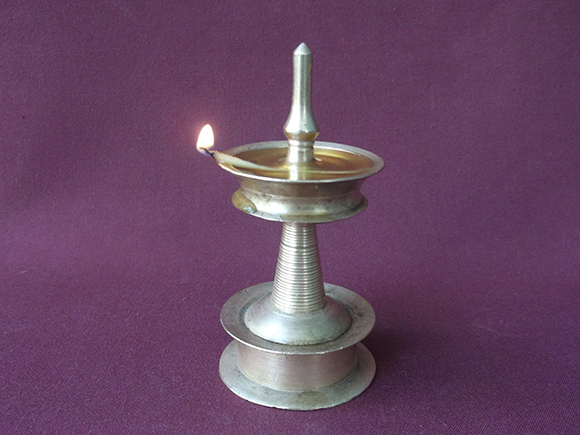 There is no functional value for the projection in the center of the oil cup but there is a symbolic value. It is sometimes interpreted that the design is symbolic of female and male reproductive system. The protruding central portion is symbolic of male genitalia on a female womb depicted by the oil cup and the burning light representing the creation of life. 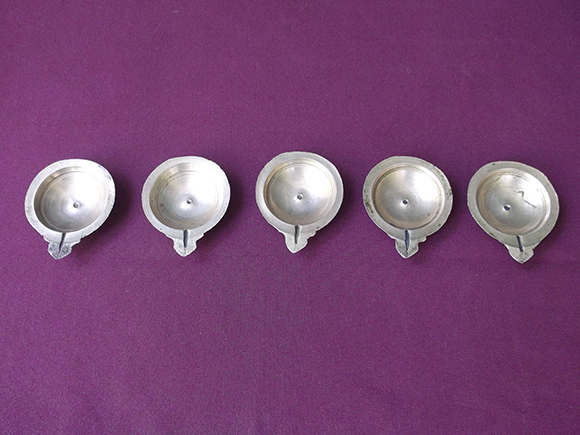 Deepam Kundi is an oil lamp that can be placed anywhere for decorative purpose. These Kundulu (plural for Kundi) are placed at a strategic place in a pooja room or to decorate a ceremonial religious event. 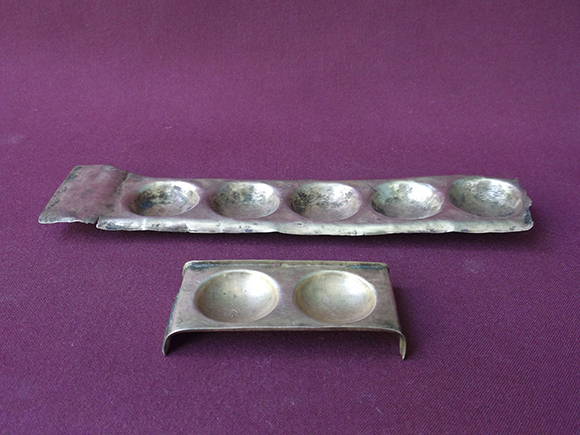 These Varasa Deepalu are row diyas (serial lamps) created on a single sheet of brass .They are used to enhance the lighting arrangement on special occasions like Lakshmi Pooja on Diwali festival and Tulasi Pooja in Kartika masam (Month of October). 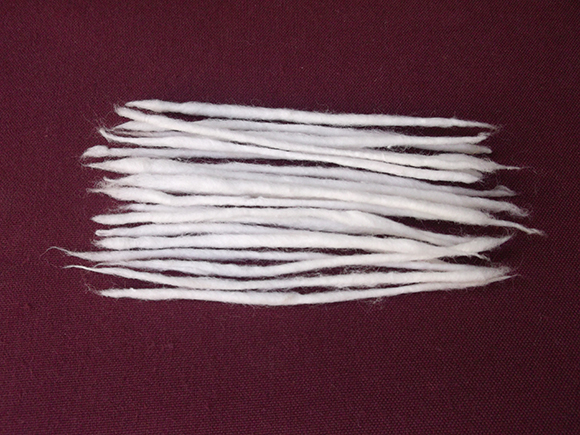 Kada Vottulu are the cotton wicks that are used to light the oil diyas. One end of the wick will be in the oil and the other end will be lighted for the flame. 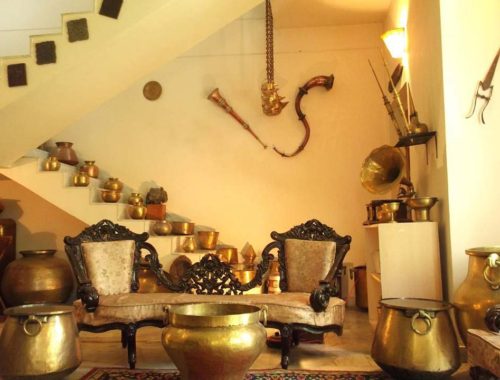 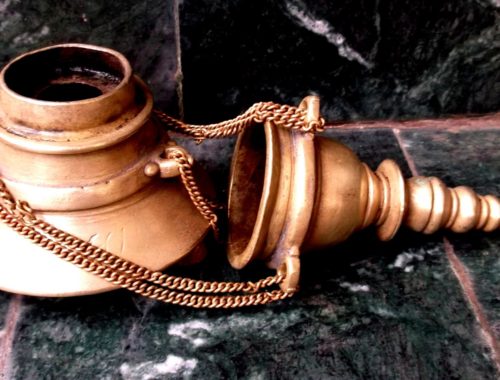 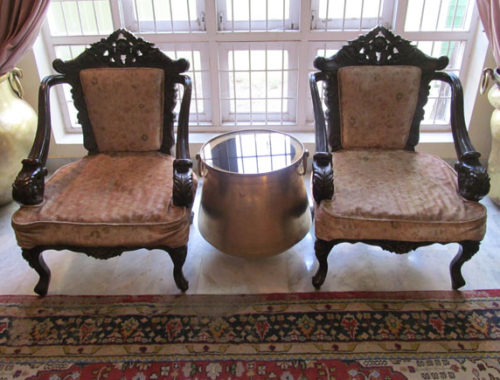 Decorating old-world in a modern home