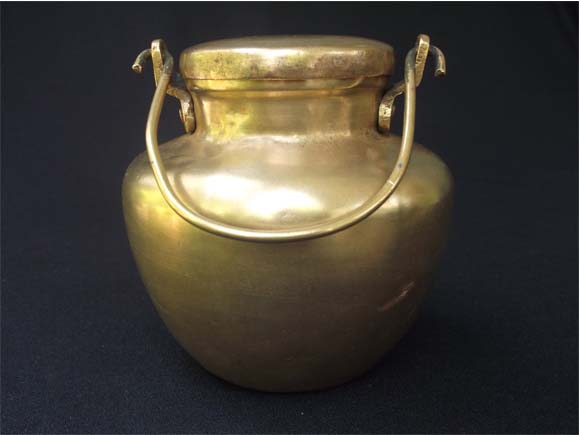 Ghee is known to Indians since 6,500 BC. This was revealed through the traces of ghee found from the excavated pots belonging to that period. Ghee was used by ancient Indians for the ritual fire sacrifices called Homam. Ghee is truly an Indian invention and mainly used in India. It has spread to the neighboring countries like Pakistan, Bangladesh, Sri Lanka and Nepal. The origin of the word ghee is from Sanskrit word ghrta. It is called ghee in Hindi, Gujarati and Bengali, ghio in Punjabi, tuppa in Kannada, neyy in Malayalam, ney in Tamil and  neyyi  in Telugu.

Ghee was stored in earthen pots in the early years and its shelf life was up to nine months. Later, with invention of metals like copper and brass, Indians started preserving ghee in copper and brass pots. I have collected two antique brass ghee storage pots with beautiful shape and I’m happy to share pictures of these vintage pots and the story of how I acquired them through this article.

Ghee Pot with Lid in Round Shape 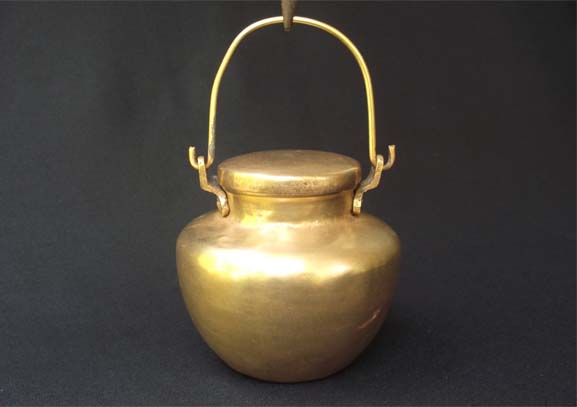 Round shaped brass ghee pot with lid and lifted handle 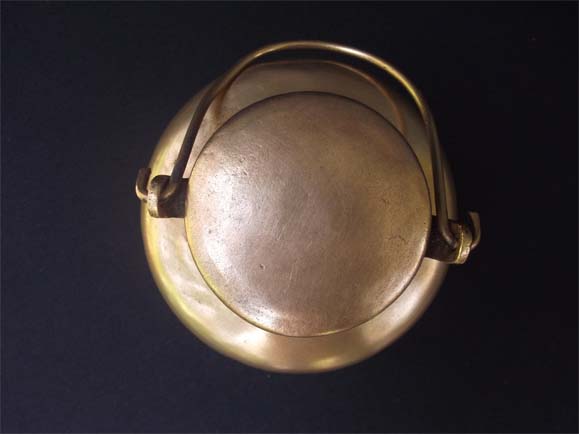 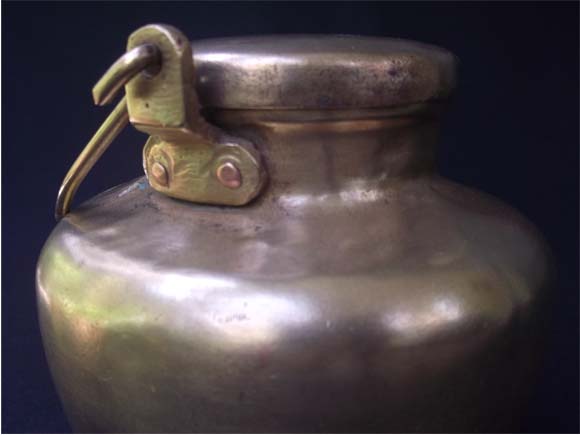 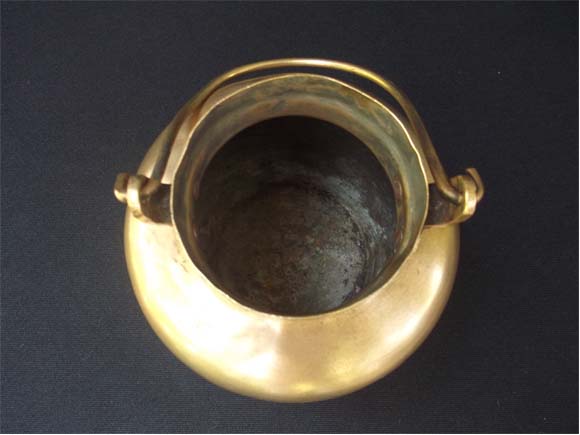 This ghee pot has a handsome round shape resembling the famous Indian lota. The pot is handmade with brass with a lid that perfectly fits the pot preventing any leaking. It has a handle made out of thin brass rod. There are two handmade brass plates riveted with copper rivets to the two sides of the ghee pot with a hole to which the handle is hooked. The handle is flexible. It rests on the belly of the pot when not in use and becomes straight when it is lifted with hand or when it is hung from the hook. Brass metal is conducive for some chemical reaction when it interacts with certain materials. To prevent such reactions, the brass containers are coated inside with a thin layer of tin metal, also known as tagarampoota. This brass ghee pot also coated inside with tin metal. 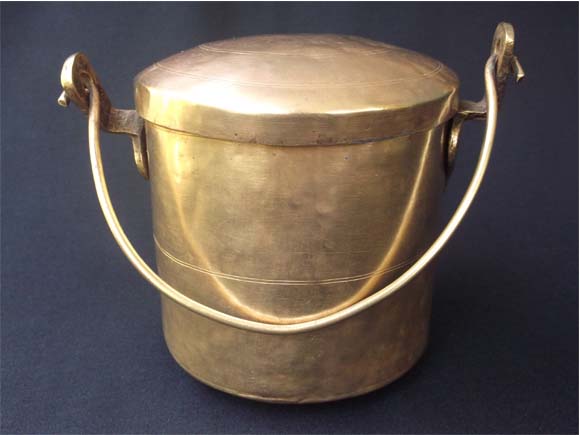 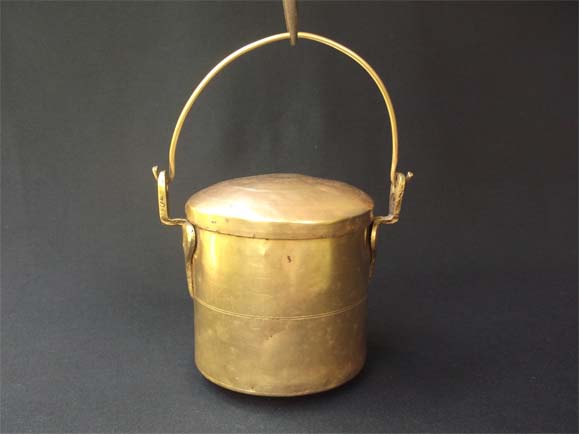 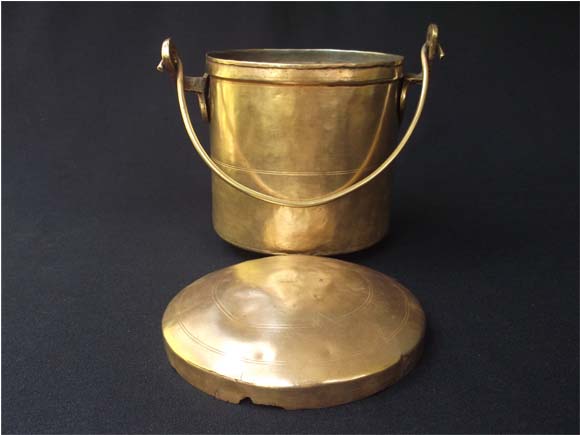 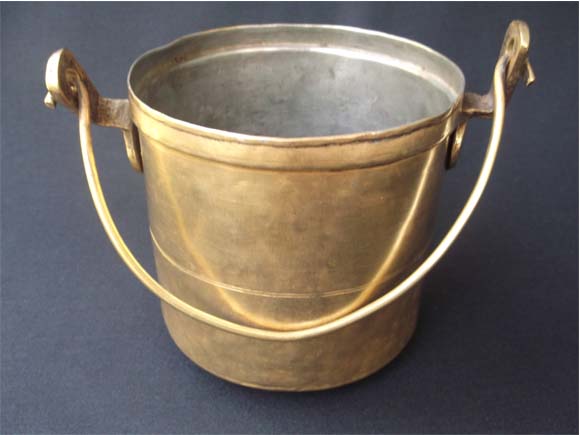 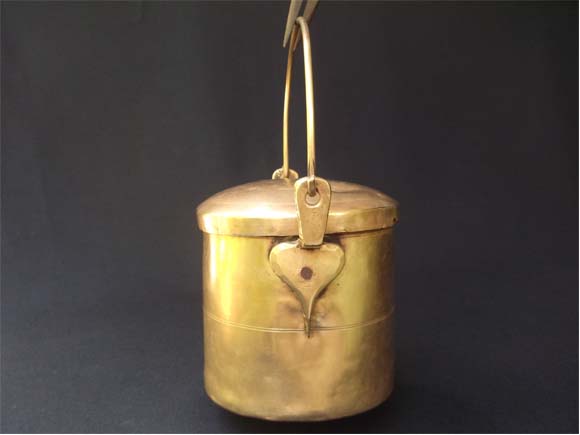 Barrel shaped brass ghee pot with tin coating on the inside

This ghee pot has a cylindrical or a barrel shape with a lid on the top. The entire ghee pot is handmade complete with the lid and handle. The cylindrical ghee pot has two heart shaped brass plates that have been riveted to the two sides at the top of the pot. These heart shaped brass plates have holes that are used to hook the brass handle. The handle is made by bending a thin bass rod. The side brass plates serve the purpose of hooking the handle and also for strengthening the body of the ghee pot. The brass ghee pot is lined with tin metal to prevent any possible chemical reaction of ghee with the brass metal.

In our ancestral house at our village Someswaram in East Godavari district of Andhra Pradesh, we used to have a place within the house called “Palagoodu” meaning a dairy cupboard fixed into the wall in which all items related to milk and milk products are stored such as milk, curds, ghee, butter, butter milk, and also oils for cooking. This palagoodu is generally fixed to the wall in such a height that children cannot reach the opening. The cupboard has two doors and when closed they are held tight by a handmade wooden latch. In my childhood days, I used to see these ghee storage pots in palagoodu. These two ghee pots are the storage pots and are specifically used for transferring a small amount of ghee to a small bowl which is then served with a spoon. The lid is always kept very tight to prevent red ants from attacking the ghee.

My mother inherited these pots from her mother-in-law and we do not know the actual person who has purchased these. But they must be more than 100 years old. There are minute dents on the body of the pots due to constant use and antiquity. There are beautiful patina marks on these ghee storage pots.

Indian culture and ghee are intricately woven into the life cycle of Indian Hindu. Here are a few examples:

Fire sacrifices called Homam have been performed way back since 5,000 years in which ghee was used. Homam is the vedic ritual of offerings to Gods through the medium of Agni (fire) in which ghee, rice, herbs and other ingredients are offered called poornahuti. In one form of Hindu worship called Pachamrutaabhishekam, the deity is bathed in a sacred mixture called Panchamrutam consisting of ghee, mishri (kalakanda), honey, milk and dahi (curd). Rice balls mixed invariably with ghee and dal (lentils) are offered to the deceased in an annual offering ceremony called shradh .

In the 5,000 year old traditional medical system native to India called Ayurveda, ghee is profusely used. Ayurveda is made up of Sankrit words – Ayus and Veda. Ayus is longevity and veda is science. Hence the word Ayurveda means the science of health and longevity.  Ayurveda considers pure ghee as a supreme food. It is considered as having immense medicinal benefits apart from being a high powered nutrient. Ghee aids in the rejuvenation for both young and old. It provides vitality, enhances fertility, improves mental function, provides good voice and brightens the complexion. Ghee is consumed by mixing it with the food which enhances the taste and flavor of the food. Ghee is so nice it can be eaten as it is.

Ghee as the Life Giver – Mahabharata and Kauravas

The great Indian epic Mahabharata gives credit to ghee for the birth and life of Kauravas. This story tells us that ghee has the power of giving life. Once, the great sage Vyasa Maharshi visited the palace of Gandhari and Drutharashtra. The royal couple welcomed them and Gandhari served him nice food with which Vyasa Maharshi was very pleased. He asked Gandhari to ask a boon and Gandhari wanted 100 sons with King Drutharashtra.Vyasa granted the boon. Soon Gandhari became pregnant but could not deliver even after 2 years. Meanwhile, Kunthi, Pandu’s wife gave birth to the first of Pandavas. Getting impatient and angry with herself, Gandhari struck her womb  which resulted in a miscarriage and a mass of flesh fell out.  Vyasa Maharishi came to know about the miscarriage and ordered Gandhari to cut the lump of flesh into 101 pieces and store each piece in a separate pot filled with ghee and close the pot for 2 years and hide them. Then Vyasa Maharishi went to Himalayas. After two years, 100 boys and one girl  broke open the pots and came out. That is how 100 Kauravas were born. The eldest being Duryodhana followed by Dussasana. The name of girl is Dusalla. Thus, Vyasa Maharishi had mentioned some 5,000 years ago that ghee has the power of giving life.

Ghee and Origin of Life

Ghee is considered as a sacred food because it is provided by cow which is considered as the most sacred animal. The origin of ghee is attributed to the Hindu vedic God Prajapathi, the Lord of creatures. He is said to have created ghee by rubbing his hands or by churning the hands together to produce ghee and pouring the same into the fire to create his descendants and all living creatures. The vedic ritual of pouring ghee into the fire is virtually the re-enactment of creation as done by Prajapathi.  Butter is a symbol of semen, churning with hands represents the sexual act, the ghee represents formation of foetus in the mother’s womb. Thus, ghee is a life giver.

My paternal grandfather, Yenugu Krishnamurthy garu, is a great connoisseur of ghee. His lunch consisted of rice, dal, vegetables, pulusu, rasam, two varieties of chutneys, one fresh lime, one pot full of curds and one bowl full of ghee. First, he would start with a small dose of rice drenched with warm ghee thus greasing the passage of the food that follows. Then he would  mix each  item with rice, pour ghee over the mixture and consume. The only exception is  curd rice with which he will mix  lime juice. By the time he would finish his food the bowl full of ghee will be empty. He lived a full life of 90 years and died one day peacefully after having his lunch with his favorite bowl full of ghee. I am inclined to think that the secret of his healthy life with full gusto till 90 years is the pure homemade ghee. He had no fat in his body or any problem of cholesterol.

Now a days we see people talk about avoiding consumption of ghee since they fear putting on fat or higher levels of cholesterol. My grandfather’s example adequately supports the theory that ghee in fact helps reduce the fat and the cholesterol and Ayurveda support this theory.

Ghee is derived from butter. Butter contains fat and milk solids. When butter is melted and simmered at low temperature, the water gets evaporated, milk solidifies and the fat gets separated. When the milk solids are filtered, pure golden colored butter fat is available which we call ghee. Ghee is luscious butter fat and an intense power food with butter flavor. Ghee has a nutty taste, with excellent aroma and marvelous mouth feel.

Your pure homemade golden colored pure ghee is ready. Keep the ghee in dry bottles with tight screw lid. Preserve the ghee in room temperature only. It will form into a nice grainy liquid. It will not get spoiled for at least six months. There is no need to refrigerate the home made ghee.

Difference between Ghee and Clarified Butter 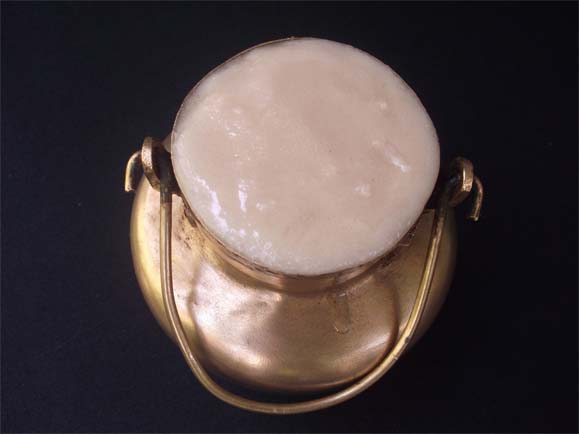 Indian sweets like Mysore pak from Karnataka, minapa sunni from Andhra Pradesh taste best when prepared with pure ghee. All those mouth-watering sweets from Gujarat and Rajasthan are mostly made with pure ghee. Boorelu, the special traditional sweet dish from Andhra Pradesh is eaten along with ghee by making a hole in the sweet and filling the hole with warm ghee. In Punjab, Haryana and Uttar Pradesh, chapathi is roasted with pure ghee. If it is not roasted with ghee for any reason, it is smeared with ghee just before serving or eating. The famous Hyderabad biryani is made with pure ghee. In south India, rice mixed with vegetables, dal, or sambar is eaten mixed with ghee. The special variety of idlis known as  Guntur idlis are prepared by applying lot of ghee and are rolled in spicy dal powder.

You may also like to read the following related articles: 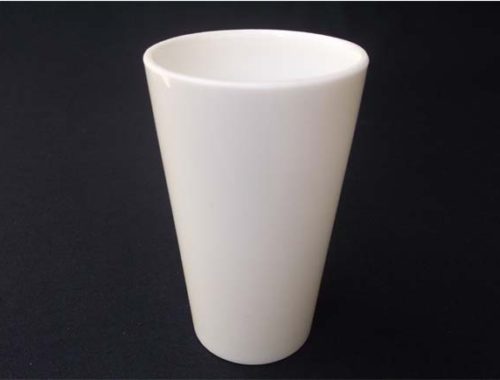 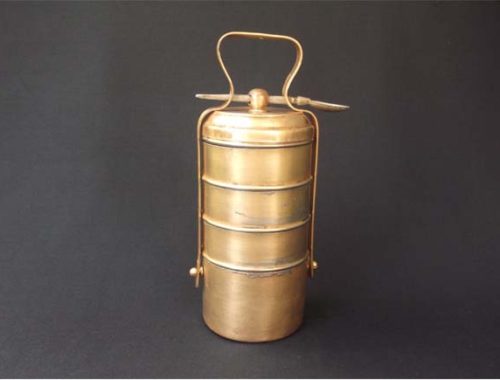