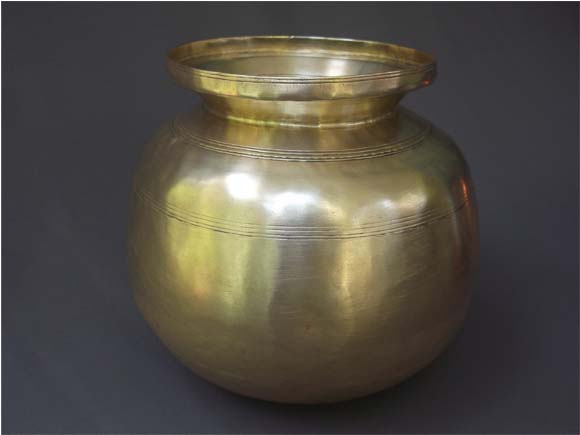 When my mother came to my father’s house for the first time in the year 1936 after her marriage, her father gifted her few items for her comfort at the new home including a cow and a brass milk pot known as paala tappela into which the milk is squeezed from the cow.  This brass milk pot is 77 years old.

My mother along with their parents came to her husband’s house for the first time in a decked up double bullock cart with all her belongings and the cow following the bullock cart. The care taker of the cow also accompanied the caravan.The list of other gift items are saris,cloths,gold and silver ornaments,brass and copper cooking and otherutensils, sweets,snacks, fruits, flowers and the most important mandatory items – pasupu, kumkuma and chanividi(a kind of sweet made with rice flour and sugar). My mother belongs to a village called Korumilli located on the banks of river Godavari, in East Godavari district of Andhra Pradesh. Her father’s name is Salapaka Lingamurthy. My Father belongs to village Someswaram named after the presiding deity of the village Someswara Swami with a magnificent temple.

The care taker of the cow, whom we call paaleru, that came from Korumilli village used to take care of the cow and milk the cow into the brass milking pot. After few days he handed over the duties of the cow to a care taker appointed by my father and left our house. Then the new paaleru took care of the cow including milking daily in the morning, feeding the cow regularly and cleaning the cow.His responsibilities include taking care of the paala tappela. The paala tappela is meant to be used only for milking the cow and after that the milk is transferred to another brass vessel for boiling the milk and further usage. Once the milk is transferred, the milking pot is cleaned thoroughly by rubbing with tamarind juice first followed by fine soil with coconut fibre. Then the paala tappela is dried and stored in its usual storage area and used to be removed only the next day morning for milking the cow. The milking is done in the evening also. 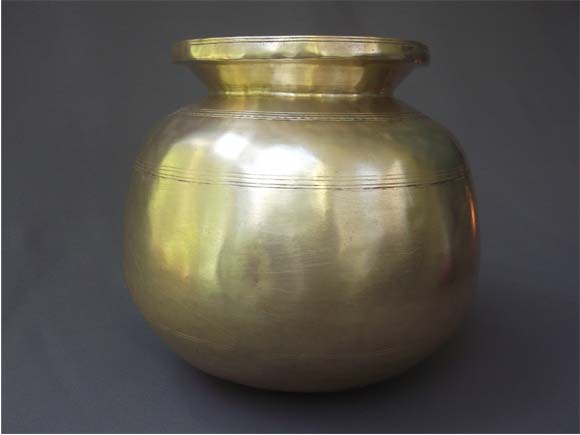 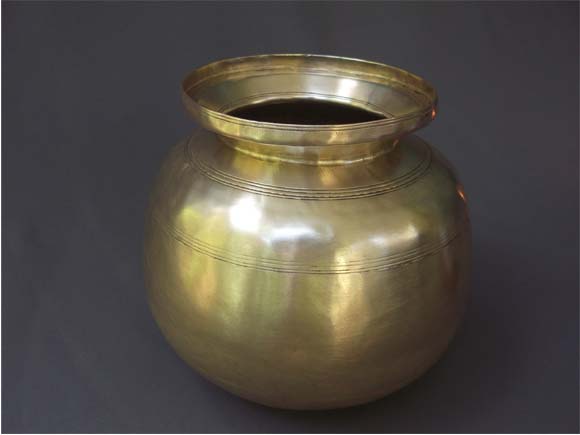 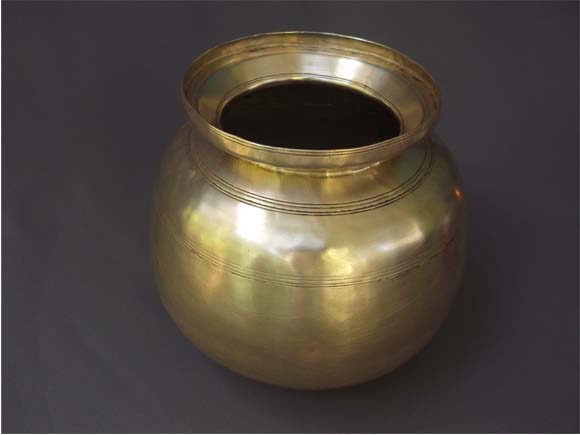 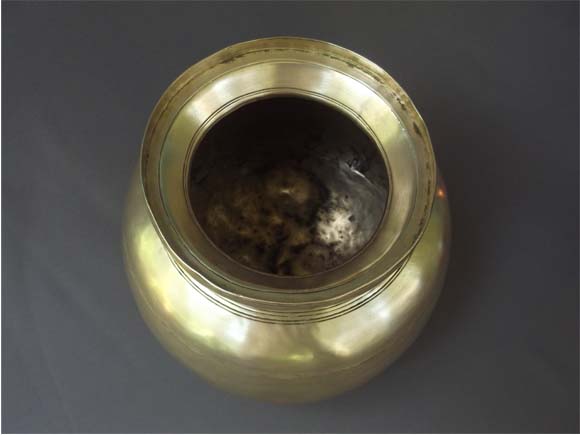 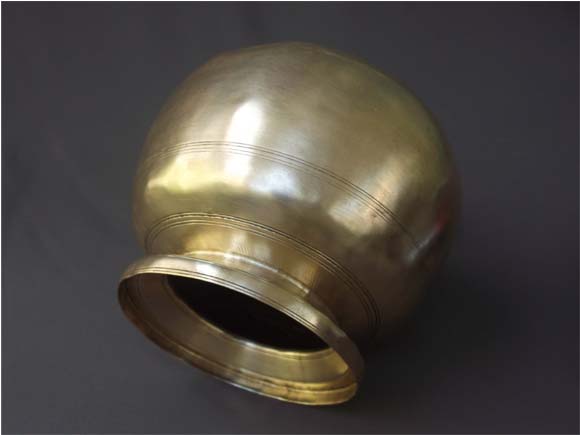 For any reason if the paaleru was absent, my mother used to milk the cow.There are two reasons for my mother to take charge of the milking, firstly, the cow is comfortable with my mother since she knows her from a long time and allow her to squeeze the milk. Secondly, nobody in the house has the required skills to handle a cow, and even if they venture for milking the cow, the cow is reluctant to allow them to touch her. After some time the cow became pregnant and after due course of time gave birth to a calf. Now the cow’s milk has to be shared between us and the calf. First in the morning the calf is to be let loose and the calf will run to the mother and have the first course of her milk. After few minutes the calf would be pulled out from the udder of the cow and our milk man would squeeze the milk but would take care that enough milk is left un-squeezed so that the calf has her full quota of the milk. 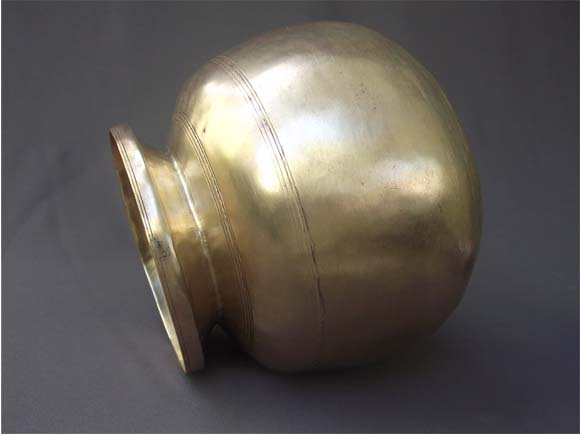 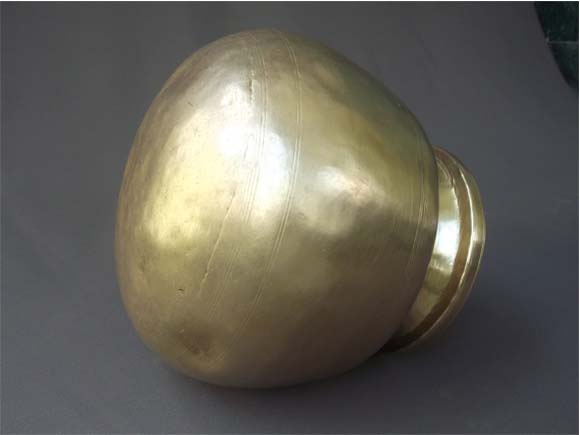 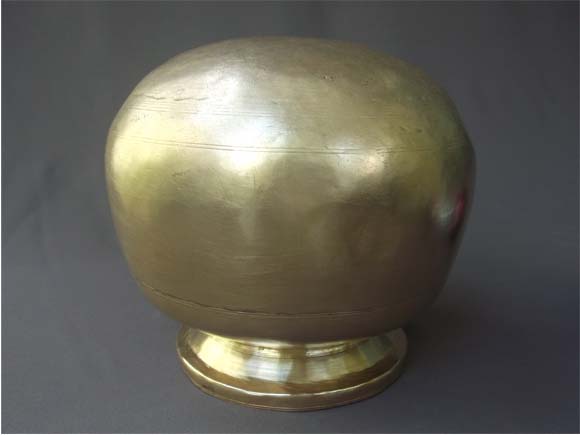 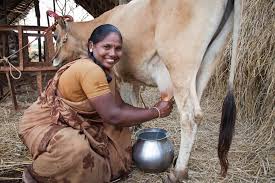 Picture showing milking the cow into a pot

The milk that the cow gives till 7 days of her delivery of the calf is entirely different .They are thick and creamy. We use to call them Junnu Paalu. My mother used to cook a sweet from the junnupaalu called Junnu .It is cooked with Junnupaalu, jaggery and black pepper. Its taste is divine.

Generally cows produce milk when they deliver the calf and will continue to give milk till they are dried-off. The cow normally is in DRY condition after 305 days of continuous lactation. This dry season lasts till the cow is with the next calf. Cow has a gestation period of 280 days almost similar to a human gestation time.During the dry season  it will not give milk.Once our cow declared that it will not give milk.So we were without milk.This information has gone to my mother’s father and he has sent another milking cow and the dried up cow was sent back to Korumilli.This rotation of cows kept us with continuous milk supply.My mother’s father used to have lot of cows and in the group there will always be few milk giving cows or lactation cows .My maternal grandfather has no problem in sending a milk yielding cow but I came to know later that he used to have problem with the cows that returned from our house.

My grandfather was a landlord and he also had farms. He also used to have a mini dairy. His paaleru used to take all the cows to the banks river Godavari for grazing the pastures. Godavari river flows in such a way that it forms mini islands in between its streams.There will be lot of green grass on these islands and the cattle have to cross the rivulets to reach the island.The rest of the cattle used to cross the waters easily but the cows returned from our house would be scared to cross the water.The reason being the cows in our house are kept in the house only and they never gone out into the fields and rivers. They were fed with cut grass and they forgot how to graze in the open meadows.

This rotation of cows between the two houses of my father and grandfather stopped somewhere for some unknown reason and our family was buying milk from milk vendors. With the result our beautiful brass paala tappela was not used and given permanent rest. Finally it joined my antique collection and occupies a regal place in our collection as well as in our hearts. Now both my mother and my maternal grandfather passed away long back, but their images and memories flood my thoughts whenever I see this Paala tappela that gave a glorious service to our family.

Milking a cow is an art .First you should establish a friendly rapport with the cow. If you approach her with negative vibes it will sense and will not cooperate with you. If you have a friendly approach she will cooperate and allow you to milk her. You have to sit in a correct posture near the cow with a convenient proximity to the udder and the teats. Youhave to sit on your feet with the knees folded. The paala tappela is kept in between the folded knees and milking is done with both the hands. The paala tappela should be positioned directly under the udder of the cow and the teats are to be squeezed so that the milk directly falls into the paala tappela. This is the traditional and professional way of milking the cow. Now a days people sit on a stool and keep the Paala tappela on the ground under the cows podugu(udder)and milk the cow. However the cow will enjoy giving the milk to a seasoned milk man by his rhythmic squeezing movements. Whereas, it will not enjoy the clumsy movements of a nervous new comer.

The job of paaleru is also to take care of the daily discharge of the cow dung.He used to make pidakalu out of the cow dung. Pidakalu are the dung made to the shape of a round disk and dried in the sun. These cow dung pidakalu are used as a fuel to boil water or milk. For Sankranthi festival as children we used to make small pidakalu called bogi pidakalu in the shape of wadas and we used to make a garland of the Bhogi pidakalu and put them in the Bhogimanta, the ceremonial fire lit in the early morning of Bhogi pandaga that falls one day before the Sankranthi. After dropping the bhogi pidakalu garland in the fire me, my sisters along with children used to sit around the fire and warm ourselves against the January winter cold .The Sankranthi festival generally falls on 13th,14th and 15th  of January. 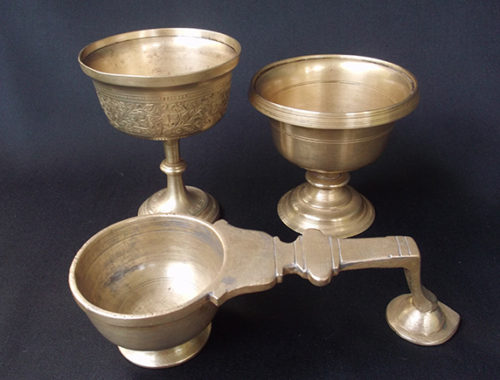 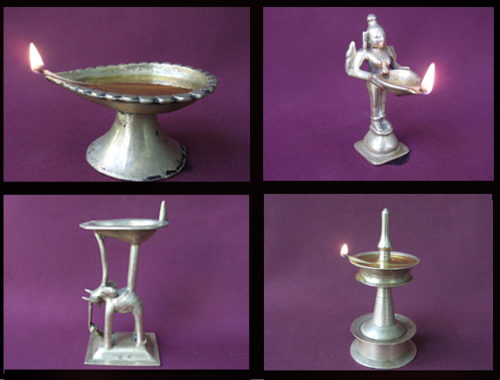 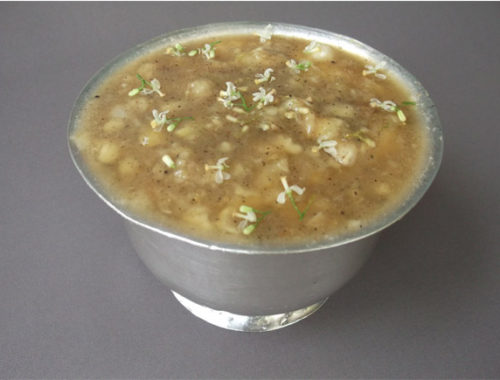