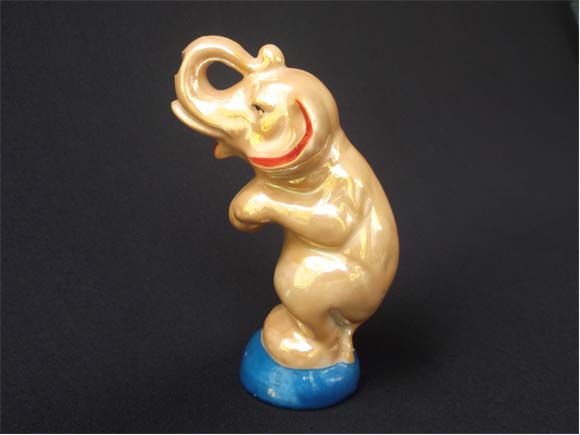 This beautiful incense stick holder in the form of an elephant is a unique antique art piece. The elephant stands on its two hind legs and the other front legs are taken up and joined together resembling a prayer posture. Its body is slightly bent forward to reveal a humble gesture. Its trunk is taken up and is resting on the head mimicking trumpeting a prayer. The mouth is wide open and the years are spread indicating a careful hearing of something important. There are holes on the trunk and incense sticks are stuck into these holes. The elephant is designed to hold the incense sticks from its lifted trunk. It gives a pious feeling that it is offering dhoop (perfumed smoke) to a divine being in a traditional prayer. The eyes are half closed and sublime like in a prayer. 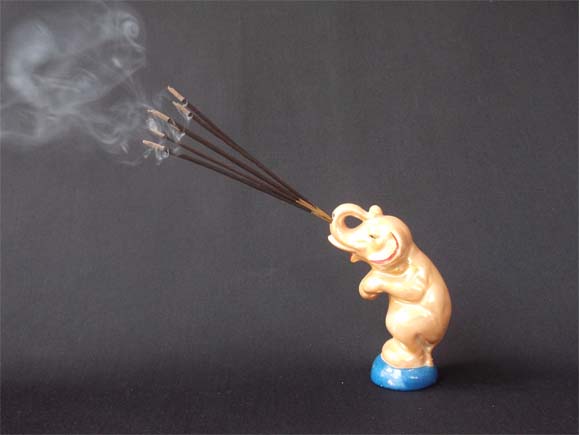 This elephant is made with highly polished shining porcelain with smooth finish. It has a beautiful golden colour. The ears are lined with red colour border. The opened mouth also has red colour. The eyes are in black colour. The elephant is standing on a   lovely blue colour base.

Measurements: The height of the elephant is 6 inches and the base diameter 2.2 inches wide. 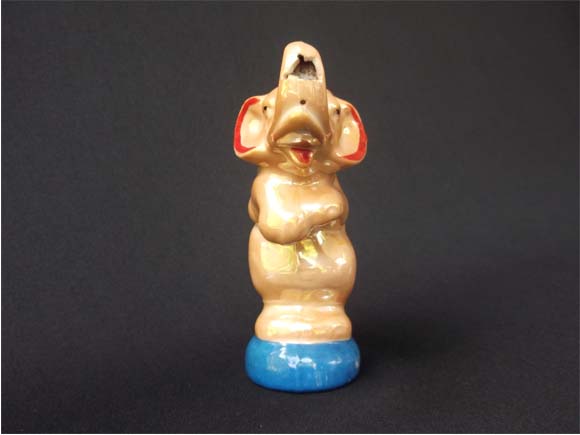 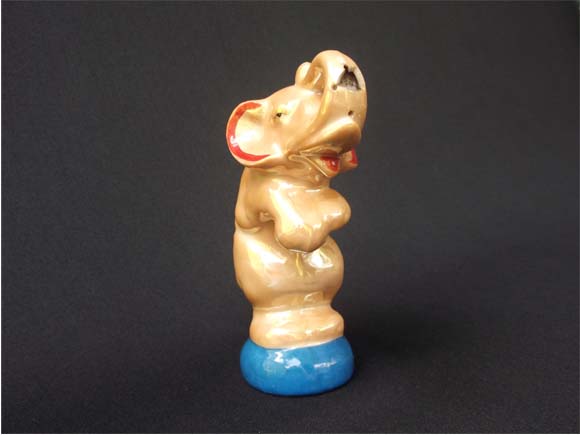 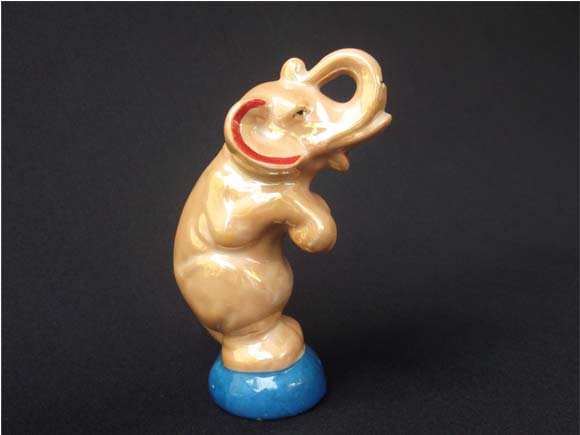 Eelephant standing on the back legs, front legs joined together in prayer posture

This magnificent incense stick holder is purchased by my grandfather. He is a follower of Lord Shiva and he used to do pooja to the framed picture of Shiva seated on his mount Nandi with his family of wife Parvathi  and children Ganesha and Kumaraswamy ever evening. He used to decorate the picture with Kanakambaram flowers, followed by inserting the smoking agarabathis into the trunk of this elephant. Then he would dance singing the songs in praise of Shiva to the rhythm of his Pandarichidathalu (a hand held pair of wooden blocks attached with cymbals)

He used the elephant incense stick holder daily for nearly 55 years but still it appears  new with the golden color still shining bright. After the demise of my grandfather we never used it on a daily basis for the fear of losing it and hence used to keep it is a cupboard in a locked condition. Occasionally we used to take it out for special poojas or for festivals. Now it is in my antique collection under rare and valuable category. We always admire its sublime and   fluid beauty.

Apart from its functional use, the elephant incense stick would make a wonderful accent piece in our grandfather’s room. It looks as though the elephant is enjoying the curling tendrils released by incense stick smoke.The fragrance from the incense smoke acts in two ways. When used in the Hindu ritual pooja, it adds to the mystic and spiritual ambiance. In other times, it relaxes the nerves and calms down the mind. The curls of smoke arising from the red tip of the incense stick take you to the fantasy world.The incense sticks come in various aromas and fragrances like rose, jasmine, lavender, sandalwood and many others. 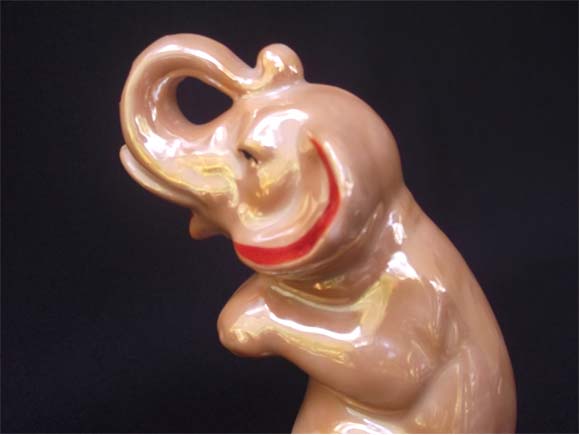 Close up of the elephant trunk, tuskers, years, open mouth and joined hands 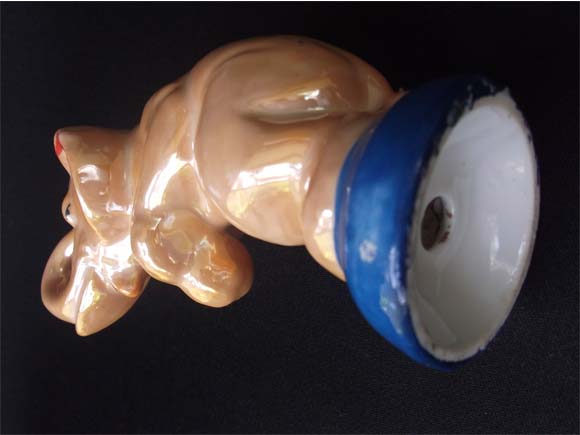 Hole in the base to put sand for stability 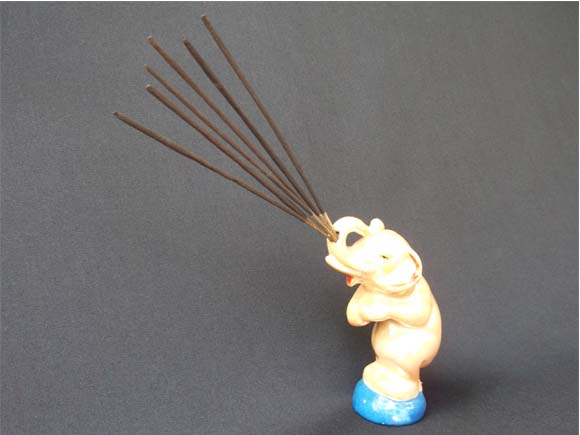 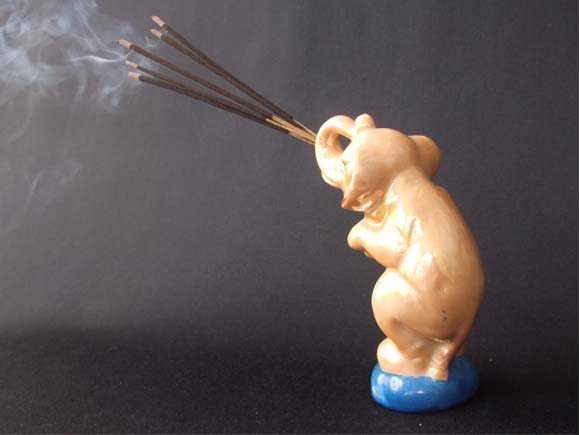 My grandfather, Sri Yenugu Krishna Murthy, purchased this wonderful elephant incense stick holder in the year 1913. Now it is nearly 100 years old. We used to get street vendors in our village Someswaram in the east Godavari District of Andhra Pradesh state, India. Those were the days of British rule. The lady street vendors used to bring imported items of interest and my grandfather is their regular customer. Any interesting item they have, they used to first bring it to my grandfather. He purchased this rare item also from such vendors. Though there is no stamp of manufacturing country on this, I believe this is manufactured in Japan. The Buddhist temples of Japan use incense sticks as a part of their ritual prayer. Elephant has a great significance in Buddhism and elephant is associated with the birth of Buddha.

The story of Buddha and The Elephant

Around 4th century BC king Suddhodana ruled a Himalayan kingdom with the capital city of Kapilavasthu. His wife and the queen’s name is Maya. They did not have children and they performed many prayers and rituals for children. One night Queen Maya got a very vivid dream in whichshe was carried by four angels to the snowy peaks of Himalayas and dressed her with flowers. A splendid white bull elephant holding a White lotus in in her trunk advanced towards Maya and circled around her three times. The elephant then entered into her body from her right side and disappeared into her. The next day morning she narrated her dream to her husband. The King Suddhodana invited 64 scholars and asked them to interpret Queen Maya’s dream. They came out with the significance of the dream and told the king that soon queen Maya will become pregnant and give birth to a boy. The boy if he confines himself to the palace he would be a great warrior and conquers the world. If he comes out of the palace compound he will become a great enlightened man and become a Buddha.

When it was time to deliver, queen Maya proceeds to her mother’s place Devadaha for delivery on a palanquin accompanied by 1,000 courtiers. The royal procession had to pass through Lumbini grove which is full of flowering trees. The enchanted queen ordered the procession to stop to touch and feel the flowers. As she lifted her hand to reach the flowering branch, she delivered the boy. The queen and the boy went back to Kapilavastthu and the queen Maya died after 7 days. The boy named Sidhartha was raised by his mother’s sister Pajapati who is also the second wife of king Suddhodana. At one point of time Sidhartha comes out of the palace compound and becomes the Buddha ,the founder of the great religion Buddhism. Thus the story of the birth of  Buddha has mysterious connection with  elephant and the elephant is symbolized as Buddha. There is no wonder this symbolism triggered the imagination of many artists who made many products with elephant motifs  used in the temples of Buddhism  including the one shown in this article ,the incense stick holder. 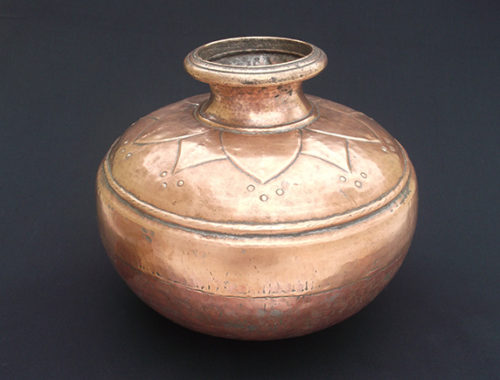 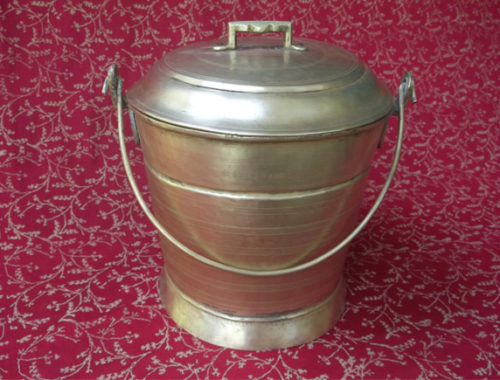