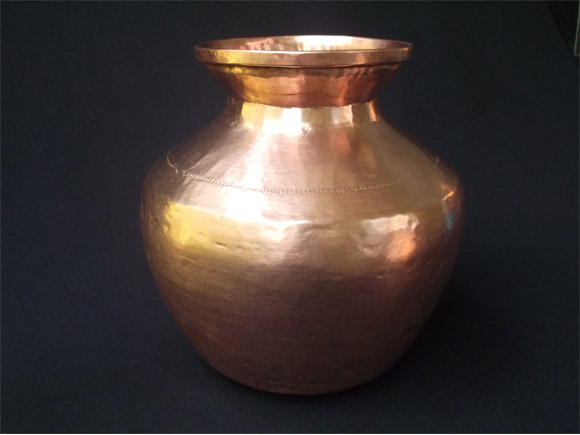 Thondi is a copper or brass pot that is used for drawing water from the well. The Thondi shown in the picture is hand made out of copper. Few decades ago when the expanding cities and towns did not have running water through pipe lines and there were no overhead water tanks to collect water by opening few valves., the main source for collecting water are wells.To collect and store water,people were using various vesselsmade out of mostly clay, brass and copper. They used to have different sizes and shapes for various utility functions of fetching and storing water. In order to stand the rugged usage of drawing water from the well, Thondi is invariably made out of copper or brass. The Thondi is used only by the orthodox Brahmins in south India who would use it from the dedicated wells meant to be used only by orthodox Brahmins.

In order to draw water from the well, one end of the rope is tied to the narrow neck of the Thondi, and lowered into the water and with dexterous movements of the rope with the hand the Thondi is coaxed to get immersed in the water. The water filled Thondi is pulled out using the other end of the rope. The water filled Thondi is then carried home by women by tucking one side of the Thondi between the hip and waist and the other side by the firm grip of the arm around the body. There is to be separate timings for men and women to draw water. The men chant their prayers while drawing the water and other holy chanting like Mantrapushpam. The men used to carry the Thondi on their head held in position by the hands or on shoulder with one arm gripping the Thondi. Thondi is a Tamil word and in Telugu it is known as Koojabindi. “Todi” in Tamil means drawing water. The vessel used for Todi is called Thondi.

This particular copper Thondi shown in the picture has a story.That was the year 1948.The backdrop is Kotthurpuram suburb near Adyar in Madras,the present day Chennai. My father- in-law Machiraju Bhaskar Rao garu got a job as Sub-Divisional officer in PWD (Public Works Department) of Madras State, which included the present day state of Andhra Pradesh also. My father-law- is a core Andhra Brahmin from konaseema area of Andhra Pradesh. With the appointment orders in hand ,he shifted to Madras, with his wife, 3 kids and his orthodox mother, Pallammagaru, and taken a rented house in Kotthurpuram. The Kotthurpuram those days is a typical Brahmin Agraharam where most of the staunch Tamil Brahmins live. Kotthurpuram did not have Madras corporation supply of piped water and the locals depend on the wells for water. Kotthurpuram used to have common wells one for each group of 5 or 6 houses. The families draw the water from the wells and carry them to store in their home in large brass vessels. There used to be dedicated wells for Brahmin community where the water is allowed to draw by using Thondi only. The buckets are considered unhygienic and were not allowed to use for drawing water. Washing and cleaning the vessels are not allowed at these wells. The other wells dedicated to other communities water can be drawn bysteel buckets or by using other devices. Washing cloths and cleaning vessels are also allowed at these wells.The orthodox Brahmin families patronise a particular well and will not allow other communities to draw water for the same well. There is also the dictum that the people should use only Thondi for drawing water and other devices like buckets are not allowed.

On the day of arrival to Kotthurpuram, Pallammagaru went to the community well meant for orthodox Brahmins equipped with a bucket and a rope made out of dry coconut husk. She was a widow and as per the custom in those days she had a shaven head and used to wear a plain white cotton sari covering her shaved head and tucked in the two earlobes. The Brahmin community welcomed the orthodox looking new lady in to their community but refused to allow her to draw water with the bucket. Pallammagaru returned home and insisted that my father-in-law to get her a copper Thondi immediately. My father-in-law applied for a half a day leave and rushed to the market and returned with this beautifully looking copper Thondi. This Thondi is used there after by pallammagaru to fetch MadiNeellu(the water fetched after observing thorough hygiene like taking head bath and wearing clothes that are washed and untouched by others). MadiNeellu are used for pooja purpose and for cooking.I was told that Pallammagaru once corrected the Mantrapushpam recital of a Tamil Brahmine and the well community were surprised at the knowledge of the Telugu widow and there after her image and prestige in the community got elevated. For the general purpose water, Pallammagaru used to draw the water from the well and Satyavathigaru used to carry the water to the house. The Thondi is 66 years old. After Pallammagaru demise, the Thondi has come into the custody of my mother-in-law, Machiraju Satyavathi garu and after her passing away in the year 1993,this lovely Thondi was inherited by my wife, Ramana and is there in our house ever since.Now it is a proud piece of antique in my collection.

The design of the Thondi is unique. It has a large belly to hold the water and a narrow neck to regulate out flow of water. The neck flares up to a wide mouth with a rim around the mouth. The narrow neck is also useful to tie the rope around the neck and the slippage is prevented by the belly at one side and the wide mouth opening on the other side. The rounded belly shape snuggly fits into the curve of the female waist. The whole Thondi is handmade and the joints are made so beautiful to look like a design. It has a curvy bottom so that it can be smoothly tilted to pour water into a tumbler for drinking purpose. The entire Thondi is conveniently designed to draw water, carry water and to store water. A real multipurpose grand vessel.

The dug well: The hand dug wells are known to have existed since ancient times.Wells are the basic source of water in most of the towns and villages. Most of the wealthy families have their own private wells and the others use the community wells. Most of these wells are hand dug wells.to dig a well, soil is excavated in round shape like a tunnel into the earth till the water source is found and further 6to 7 feet deep down from the water table.The entire surface of the tunnel will be lined with stones or bricks so that the soil around the tunnel do not slip into the water. After invention of cement,it became a practice to line the tunnel with pre-casted well rings made out of cement which are lowered into the well one over the other. The lining will be extended above the surface up to 3o 4 feet to form a wall around the well to prevent animals and humans from falling into the well by accident.This will also prevents from surrounding  water entering the well from the land around. Some of the hand dug wells have a pulley system to draw water with comfort.

The step wells: Step wells are large intricately designed structures with convenient steps from the upper level of the ground sloping down till the level of the water body. These are architectural marvels.People with water pots can step down till the water source and climb back with the water.The step wells are more prevalent in the western part of Indian states like Gujarat and Rajastan. I have also seen a beautiful step well in Mathura, the birth place of Lord Krishna and also in the heritage site of Hampi, the once upon capital of the great Vijayanagara empire. In summer hot days, people go and sit near the water body on the steps for cool ambience. Step wells are centres for social gathering where people meet in the evenings and exchange local news and gossip. The step wells were known to have existed since Neolithic period. There are step wells discovered in Cyprus belonging to 7,500 BC andin Israel belonging to 6,500 BC.

For further reading on copper pots for water please click on the below link: