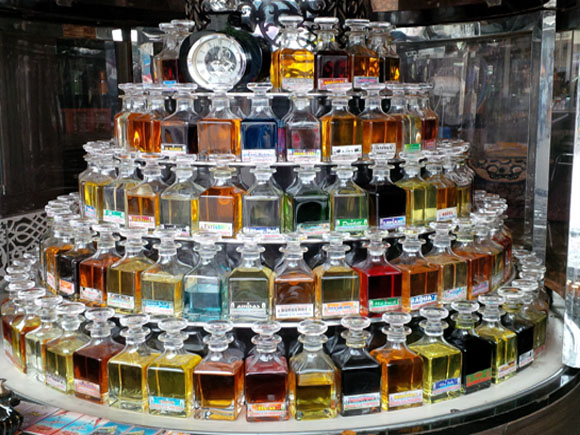 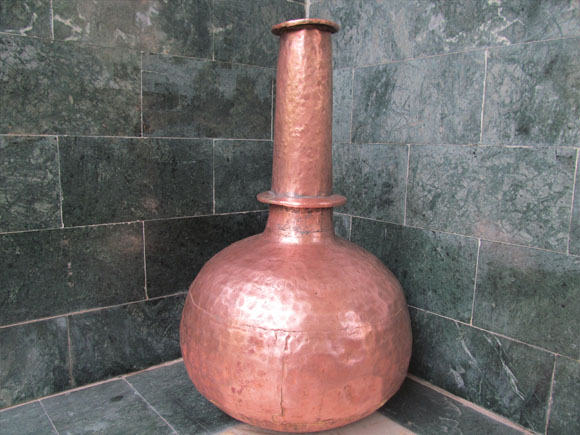 Attar is an Indian name for the traditional perfumes made in India by ancient technique of distillation using copper vessels.This beautifully shaped copper vessel called ‘Bhapka’ is used in the traditional method of distillation of attar. The very mention of attar gives a romantic feeling of lingering fragrance that is unique to Indian culture. Mughal emperors, Indian Maharajas, their queens and harems, the noble families of bygone era, all used delicately scented traditional attars for lifting their souls to new levels of ecstasy and make themselves more inviting. Each royalty patronised their own favourite attar and their arrival was significantly felt by the kind of attar associated with them and the gentle perfumed wind heralded their arrival into the royal durbars, courts and to their ladies.

The traditional attars are made with rare and exotic variety of flowers, herbs, roots and spices. The base oil

for the attar is Sandalwood oil. It has the inherent quality of absorbing the scents of the other oils by subsiding its own scent.

Collection of rare attars – Display from a shop in Hyderabad

The once famous and most adored traditional attars of Hindustan are no more available in their sublime purity. The pervading adulteration has also penetrated into these traditional scents. The reasons could be the rarity and the high cost of sandalwood oil

, insensitivity to fine taste and quality and most importantly the greed to make money

with their abundant side-effects could be one of the reasons for the lack of buyers for the authentic, pure agro-based and environment friendly (eco-friendly) attars. The so called sprays of foreign scents that produce more gas and side-effects than perfume with their low price have virtually killed the traditional attars that gave the divine and delicate fragrances to the connoisseurs.

A Memory from My Childhood

When I was about 12 or 13, there was an attar vendor whose name was Sayeeb. He used to come to our house often and sell a variety of attars. He was a middle aged Muslim man, dressed in a traditional white kurta and pyjama along with a turban with its tail end hanging till his hips. He sported a pepper-salt beard, had an assorted colored beads necklace hanging around his neck and walked barefoot. He carried a beautiful wooden box with brass trims, lined inside with maroon coloured mukhmal (velvet) cloth containing different bottles of attar. Each bottle was securely placed in the square slots resembling pigeon holes. The box was hung on his shoulder with the help of a thick cotton tape secured to the brass handles of the box.

Whenever he used to visit our house, he used to unlock the box and open it for us to have a glimpse of the beautiful bottles with divine fragrances. He would ask us to stretch our hands and then would dab tiny amount of attar on the back of our palms and ask us to experience the fragrance. Once we were convinced and our selection made, he would dexterously pour the ordered quantity into our tiny glass bottles taken out from our own little attar daan. Attar daan is a small box with brass trims having slots inside to place each attar bottle which has a mini lock. Locking the attar daan was very much required since the costly and rare attars had to be protected from misuse. The attar daan was always kept in a cupboard with other valuable items like silk sarees, gold

The Making Of Traditional Attar

The process of making traditional attars takes a minimum of ten days.The flowers are soaked in water and heated in large copper pots . The automatic vapours are then transferred to a receptacle copper vessel through bamboo pipes containing pure Sandalwood oil

which is the base oil for attar. Attar is also made from aromatic spices, herbs, roots etc. 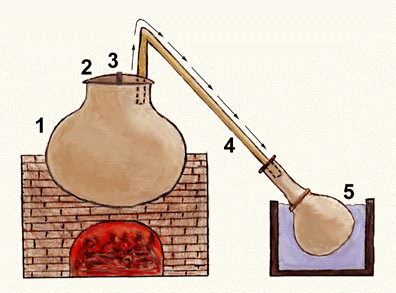 Part one is a large copper vessel called ‘Deg’ in which water and fragrant flowers to be distilled are placed.

Part two is a copper vessel with a large belly and narrow long neck called ‘Bhapka’. Bhapka means ‘steam’ in Hindi language and that is why the vessel that captures the fragrance filled steam from the deg is called bhapka.

Part three is a ‘Chonga’, a hallow bamboo pipe that connects the deg and bhapka. The bamboo pipe is wrapped with rope made from local grasses and serves as an insulator to the pipe.

The simple distillation unit extracts the inherent delicate essence of the fragrant flower. The deg is filled with pure water and then the fresh fragrant flowers are placed inside it. Its lid is then sealed by a clay ribbon of approximately three inches and tightly held by a spring called ‘Kamani’ which makes a vapor tight sealing system between the deg and its lid.

There will be a hole on the lid to insert a bamboo pipe to extract the vapors from the deg. The receiving copper vessel i.e. bhapka is filled with pure sandalwood oil. Bamboo pipe is inserted into its mouth and sealed with clay and cotton. The sealed bhapka with the bamboo pipe is lowered and allowed to settle down into the waters of a cooling tank known as ‘gachchi’ that eventually converts the sweet vapors into molecules of fragrant attar.

The other end of the bamboo pipe is inserted into the hole in the lid of the deg and sealed tightly by the combination of cotton and clay. The deg containing flowers in water is heated with wood or cow-dung fire and the fragrant vapors produced rise up from the deg and pass through the bamboo pipes into the bhapka immersed in the cooling tank. The vapors get condensed in the bhapka and after distillation the water and oil get separated and the aromatic oil molecules get absorbed by the sandalwood oil. Then the water is taken off or decanted through the hole in the bhapka and mixed with the water in the deg for the next process of distillation. 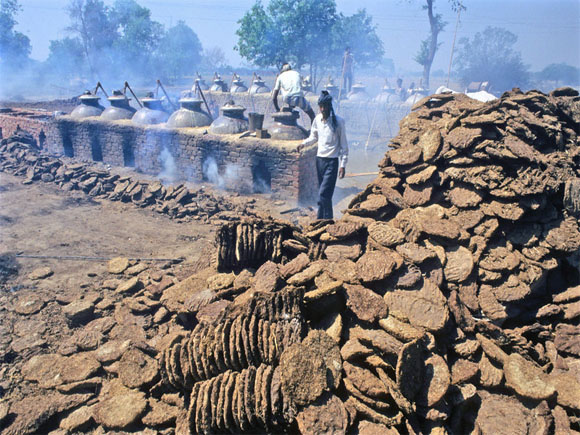 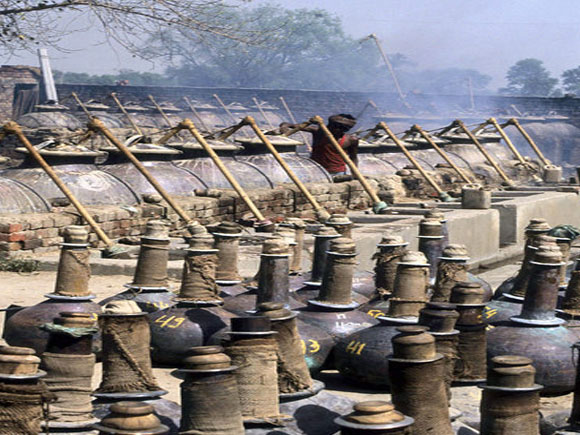 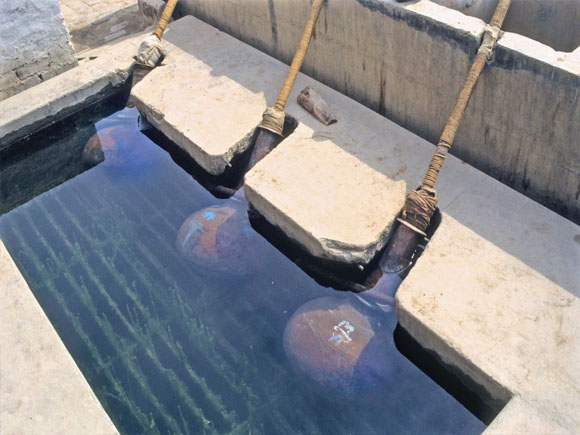 Bhapka immersed in cooling tank for condensing the attar vapors

A Little Something about the Marvellous Antique Bhapka

This bhapka is handmade with copper metal sheet of thick gauge. You will observe beautiful hammer marks throughout its body. It was initially made into few parts and later joined together to make a perfectly shaped bhapka with a nice big belly and a neat long neck. At a glance, it gives an impression of a huge copper flower vase made perfectly. This is how I looked at it when I first saw it in the warehouse of an antique dealer in Ahmedabad way back in the year 1986. During one of my usual rounds to antique shops in Ahmedabad, I saw this odd looking copper vessel and I inquired about it with the shop owner. He had no idea about it. I liked its shape and the pattern of the hammer marks. I also saw that there were inscriptions on the body and I was confident that I could decode the inscriptions and find out the true nature and purpose for which it was made. I struck a bargain and brought it along with me to Mumbai where I used to stay back then. After cleaning, it was so beautiful and shiny with pinkish brown color. Its flower vase type of shape gave me an idea that it would make an exquisite floor lamp base. I bought a large size lamp shade made out of gold color silk cloth and fixed it on the top of its long neck. It was perfect! Later it became a center of attraction in our drawing room and conversation piece when guests would arrive. 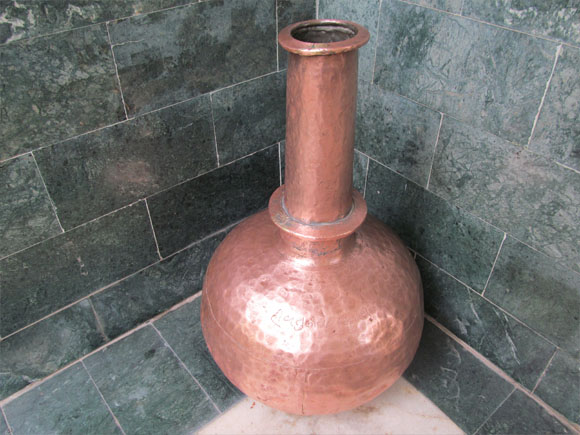 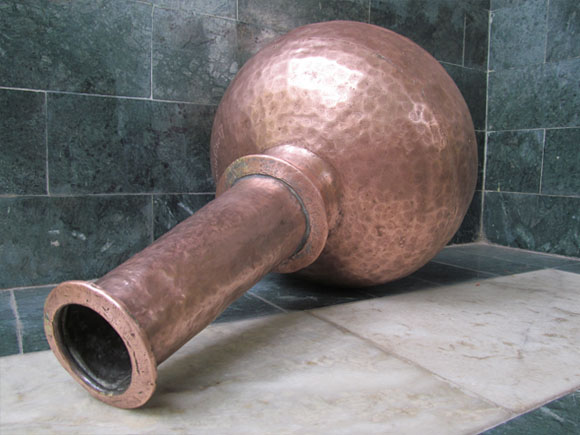 Bhapka shown in the inclined position 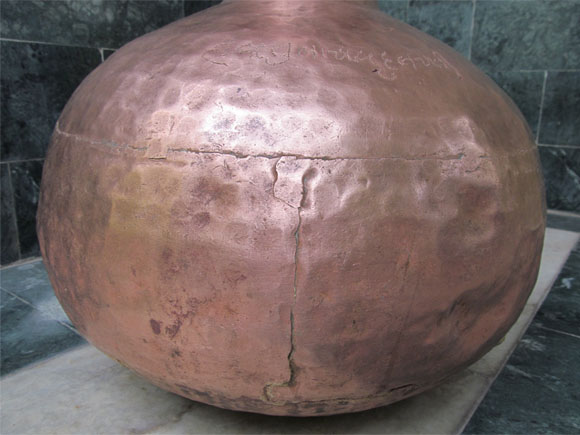 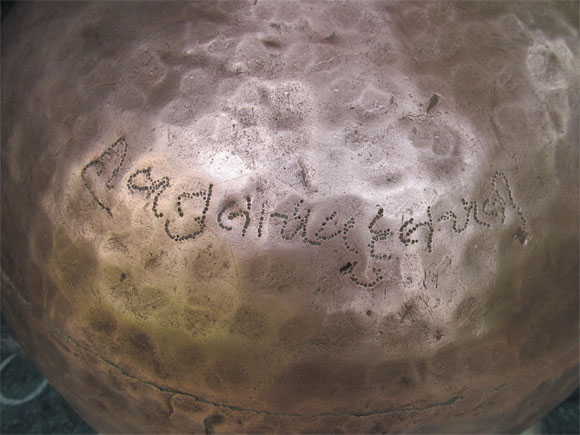 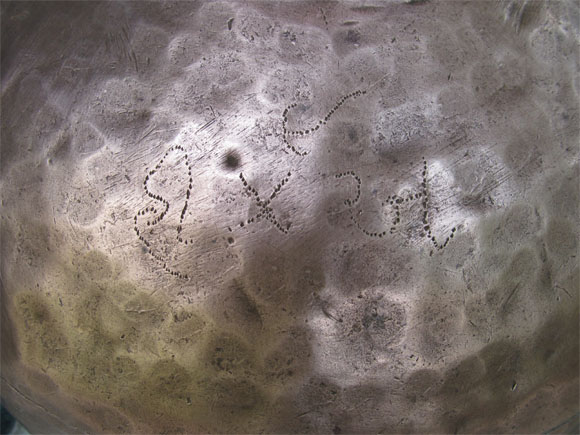 Another inscription on the body of Bhapka 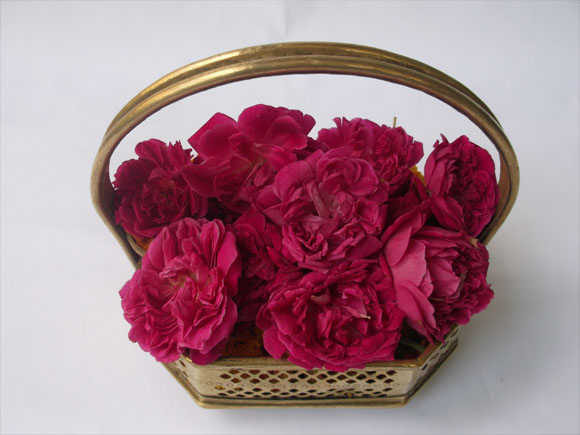 Rooh Gulab attar is made with roses

The old classic literature on attars say that the floral variety that are primarily used for making attar are rose, jasmine, bele, molesari, champa and tuberose. Coming to root variety, vetiver and ginger are mainly used for making attar. Barks of trees like cinnamon, sandalwood and aloe bark are also used. Musk, ambergris (a wax-like substance that originates as a secretion in the intestines of the sperm whale, found floating in tropical seas and used in perfume manufacture) and myrrh (a fragrant gum resin obtained from certain trees) are also used.

For all these ingredients, sandalwood oil is used as the base oil since the natural fragrance of the oil vanishes and it imbibes the aroma of the flower.

The Right Way To Apply Attar

It is mentioned in our ancient texts as to which part of the body should be anointed with attar for the maximum benefits in terms of aroma and health to the body and mind. Attars are applied on ‘pulse points’ which emanate the aroma most effectively. The blood vessels are nearest to the skin at the pulse points giving off much heat thus serving as mini pumps of fragrance. The warmth generated from the pulse points diffuses the aroma of the attar into the air. The continuous diffusion function of the body helps the wearer to enjoy the aroma through the day.

The sensitive pulse points are located behind the ears, between the breasts, on the neck and on the ankles, elbows and knees. Attar is to be applied on the heart centre, over the points of wrist pulse, back portion of the ears and on the subtle energetic pathways called marma points known as ajna or sthapani on the middle of forehead area. These points are conducive for the aromatic oils and they can be fully absorbed into the skin and the release of fragrance is gentle and subtle around the body. These aromatic attars regulate the breathing rhythm, stabilize the heartbeat, soothe the nervous system and calm the brain. These gentle aromatic attars lift your spirits to a higher level of consciousness, regulate prana and circulate the vital energy throughout.

A Brief About Sandalwood Oil

Sandalwood oil is distilled from the matured tree heartwood and the roots of the tree. The oil is extracted by water or steam distillation method. A mature sandalwood tree yields up to 60 kilograms of perfumed oil. Most of the oil produced is used by the perfume and toiletries industry. The world famous Sandalwood soap is manufactured from the oil extracted from the trees grown in the forests of Karnataka around Mysore.

The advantage with perfume manufacturing using the distillation process is that the fragrance improves with the age of attar. The sandalwood oil is a fantastic fixative and an excellent preservative. If the attars are carefully preserved,the quality improves with age like in a vintage wine. 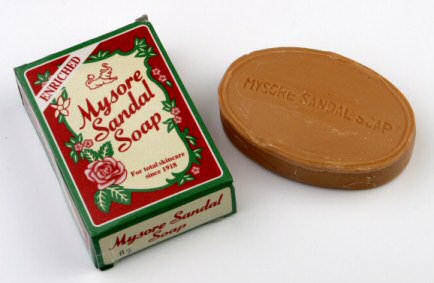 You never must have given a thought about how attar is made till now. But behind it is an elaborate process and the vessels used were made for a purpose. With the advent of technology, traditional methods are slowly taking a hit along with all things associated with it. By now I guess you know that every time you apply a drop of attar, thousands of flowers  go into making the perfume along with the hard manual labor of artisans who take it upon themselves to keep alive the tradition of the dwindling craft of making attar. The attar is natural and made from nature’s most delicate creation known as flowers and aromatic produce. It is gentle on the skin and has no side effects. It is absolutely divine! 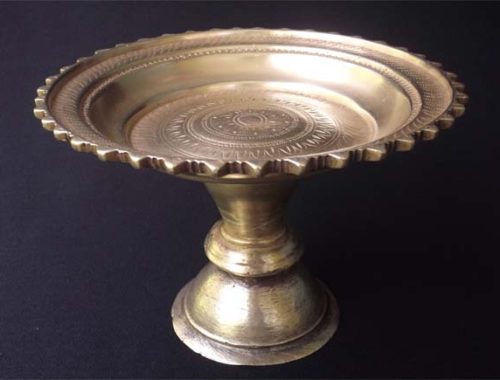