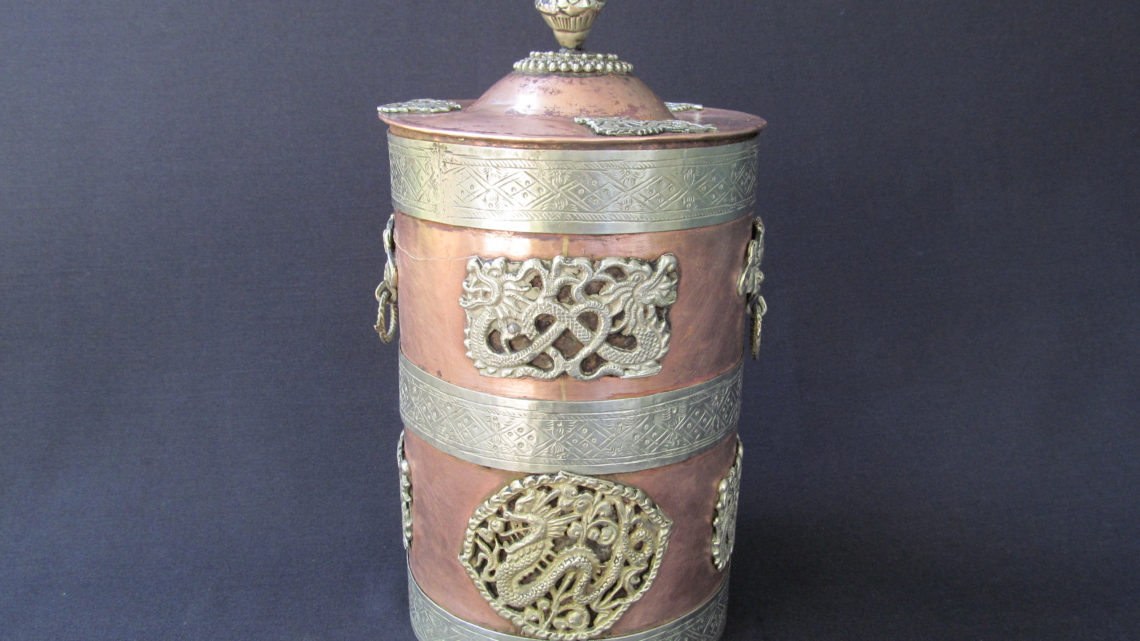 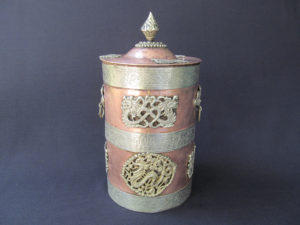 Mystical copper vessel with 3 white metal strips, dragon embellishments and the lid with the knob

Copper has played an important role in human civilization. It is one such element that has been extensively used in shaping up the history and culture of Asian countries and the world at large.Copper holds the significance of being an essential mineral required by our body to finding a place in the temples and monasteries as a vessel of prime importance on which food is offered to the Gods.

As the saying goes “beauty lies in the eyes of the beholder”, people who value aesthetic taste and sense will any day opt for items that look unique and rare and that are made up of copper or brass. A midst all antique and vintage items, one such rare collectible is the “Mystical Copper Vessel”.

What makes this container unique and valuable is the embellishment it has on its body. This container is primarily made up of copper with white metal embossment. A closer look at the container reveals carved white metal dragons and a mythical face making it obvious that this container originated in Tibet and became popular amongst the Buddhist monks or people of some prominence.The mythical face later discovered as Kirthimukha after a detailed research. 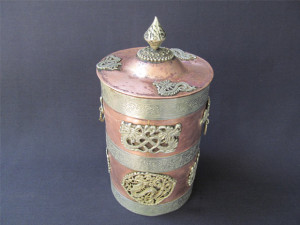 Mystical copper vessel with 3 white metal strips, dragon embellishments and the lid with the knob –an angle view

About the mystical copper vessel:

This vessel is hand made of pure copper in a cylindrical shape with a decorative lid. There are three white metal strips embedded around the vessel,one at the bottom,one at the top and one at the middle.The gap in these strips are filled with white metal carved embellishments of single dragons surrounded by intricate design forming a round shape,pair of dragons intertwined forming a rectangular design and a Kirtimukha

Talking about the physical appearance of this mystical vessel, it looks like a cylinder and features all the properties of a cylinder; it has a flat base that can stand or slide and a curved body that can roll. This container comes with the lid that is detachable and has a handy knob on the top and three dragon motifs in white metal surrounding the knob.The white metal knob has a shape of two cones tapering smoothly to opposite sides from a central round base.One tip of the cone is embedded into the center of the lid surrounded by intricate circular white metal design. There are three white metal dragon around the circular design.

Once the lid is placed over the container, it gets securely sealed making the lid look like an extended version of the vessel. It also has white metal holders attached on the sides; the holders are round in shape and resemble rings that are capable of moving around. The purpose of the holder is to make it easy in lifting the vessel and maneuvering it around. The other advantage of having those holders is to have a tight grip on the vessel and stop it from slipping from your hands while lifting or moving. The exact use of the vessel is unknown. However, we assume that it must have been used to store some items related to Buddhist religious ritual. 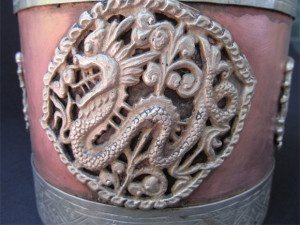 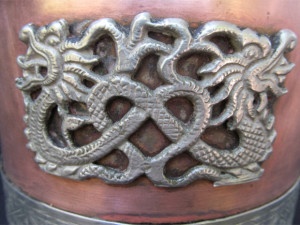 The dragon in Buddhist Mythology.

According to the Buddhist mythology, dragon is depicted as a creature withcreative power and positive energy; it is also associated with change and wealth.They also depict courage, strength, passion, creativity and mastery. Dragons are also considered ashaving magical and balancing powers. They make us to get into our deep psyche and visualize the world through wonder and mystery.The dragon is the supreme being of the basic elements of wind,water,earth and fire.Dragons are considered as controlling guide and guardians.

Though dragons are imaginary creatures but you will find some signs depicting their existence in most Buddhist monasteries and Gumpas making it real. Dragons are also worshipped as the protectors of Buddhism. Like in Hinduism,‘snake’ is regarded as holy and worshipped in different forms, dragons are considered sacred in countries like Bhutan, Japan, China, Nepal and Tibet where the major religion is Buddhism.

In Sanskrit, the word mukha means the “face”and kīrti means “glory “. Thus Kirtimukha means the face of glory. The origin of “Kirtimukha” goes back to a legend from the SkandaPurana which says that an all-devouring monster created from Shiva’s third eye willingly ate his body starting by its tail till only his face is left with as per Lord Shiva’s order.Lord Shiva, pleased with the act of the monster gave the face the name of Kirtimukha, face of glory. Lord Shiva also blessed him that Kirtimukha will remain always at the entrance of the temples. Buddhists have adopted some of the mythological motifs of Hinduism into the construction of Buddhistcaitya, stupa and viharas and Kirtimukha became one of the prominent Buddhist motifs on the gateways of these Buddhist religious places. 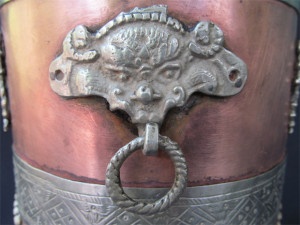 The main features of the Kirtimukha are depicted as having a demonic mask of great ferocity with protruding eyeballs, stout horns, and a gaping maw with prominent fangs or canine teeth and the tongue protruding out.  Kirtimukha is depicted as issuing garlands or festoons from the mouth. Festoon is a decorative chain of flowers, ribbons, etc, suspended in loops as in garland.  In Buddhist mythology the mouth of Keertimukha is depicted as clutching the wheel of samsara-depicting the impermanence of the life.

Kirtimukhas often appear above archways, dormer windows and gates, of the religious places. Kirtimukha is also the main feature in the cloth door hanging in the Buddhist temples called as a toran. The Tibitan Buddhist traditional banners and hangings that adore temples and shrine rooms are intricately embroidered with Kirtimukha. Most of the Buddhists regards Kirtimukha as a magical power that wards off evil spirits and hence an auspicious motif.

Jalandara was a powerful Asura king and he conquered all the three worlds. Lord Shiva’s marriage with Parvathi was to take place at that time. The proud Jalandara sends a word with his messenger Rahu,that Shiva should leave Parvathi alone since he plans to marry Parvathi as he is the right person for her hand. Lord Shiva becomes so angry that a dreadful being shoots out from his third eye.The dreadful being rushed ahead to eat away Rahu.Rahu pleads mercy with Lord Shiva and then Lord Shiva commands the dreadful being to leave alone Rahu.But the Dreadful being was so hungry and asks Shiva to give it food to eat.Shiva commands the being to eat its own body flesh and satiate its hunger.The being eats its own body starting from the tail leaving its own face.Pleased with the behavior of the dreadful being since it saved his honor by not eating Rahu for whom he has given protection,he blesses the face that hence forth it will be known as Kirtimukha and will decorate the gate ways of the temples. 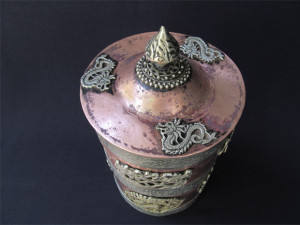 Mystical copper vessel with 3 white metal strips, dragon embellishments and the lid with the knob

The story behind why it is called Mystical vessel.

I have enquired with Mr. Y. Krishnamurthy, known as YK, as to how he collected this wonderful piece. He said when he was in Madras (now Chennai) in the year 1983,he saw an advertisement in Hindu newspaper that a family was shifting to USA and their household items were for sale. Immediately after he saw the ad, Mr. YK rushed to the address given and he surveyed all the items they have for sale. This copper vessel immediately attracted his attention and he fell in love at the first sight. He said, he does not know what for it is used and he does not know the meaning and the significance of the mythological embellishments on the copper vessel. The beautifully shaped copper vessel with the unknown magical motifs had casted a spell on him and the mystical charm of the vessel pulled him to buy the vessel. From then on words the vessel is referred to as mystical vessel.

The vessel is there with Mr. YK since last 33 years, but he does not know since how long the previous owners had it with them. He was told that the mystical copper vessel is from Tibet. 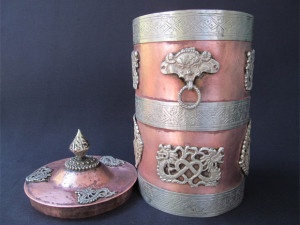 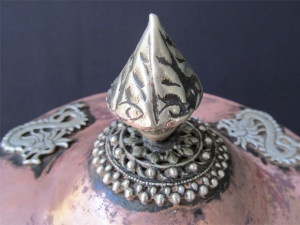 This particular item may not have been a household item as it looks grand, mystic and holds some kind of religious significance. It is definitely an antique masterpiece handed down over the years that has been successfully screaming the Buddhist culture.This mystical vessel is placed prominently in the hall of Mr. YK’s house and is a head turner.

It is not surprising to find statues and idols made of copper being worshiped by the Hindus and Buddhists all over the world. We have seen different types of idols, tools and utensils made of copper used as household items or items holding religious significance throughout the history. Copper utensils and vessels were widely used in the past, however, the trend is in a declining mode as people have changed with changing times and are getting used to using stuff made up of cheap plastic. Copper utensils and vessels are regarded as one of the finest items showcasing the culture and heritage of a particular era or a country.

The best thing about antiques is it always comes with a story that enlightens us with history, value, morals and culture. So this vessel is one of them. If you have any insights about this vessel, feel free to share the same with us. We would be glad to hear more about this vessel.

Mystical copper vessel with 3 white metal strips, dragon embellishments and the lid with the knob –an angle view 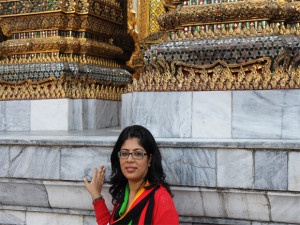 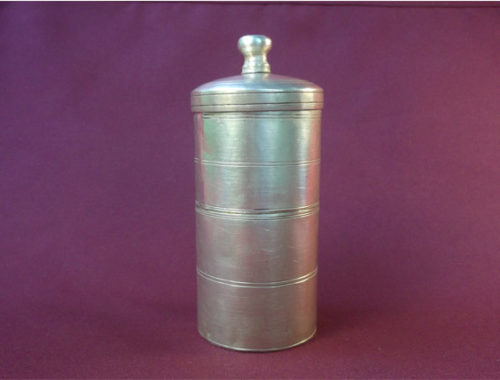