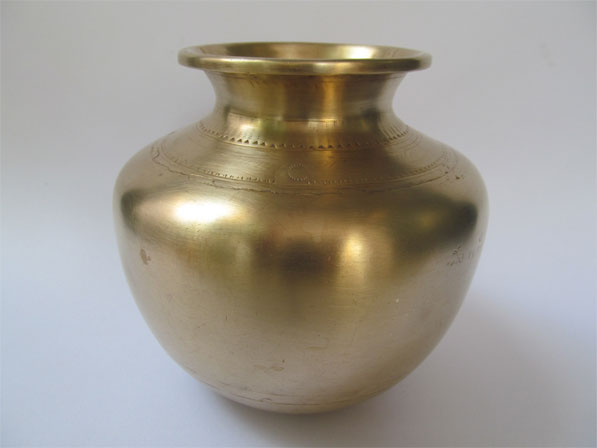 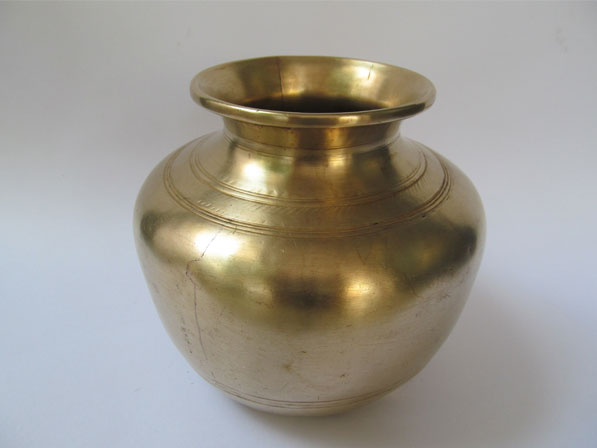 India,the Incredible India, has diverse cultures, mysterious rituals ,age old traditions, rich heritage  and  mythical legends .This is a land where people worship a stone, a tree, a river and a snake and  many more since they see God in all of them. The Hindus in India believe that the entire universe is the manifestation of god Himself in different forms and hence you can see God in every aspect of the universe. There is an underlying sound faith in god behind the multiple rituals and ceremonies they perform. One of such ritual is Fire walking. The fundamental faith is that if you are righteous, god will protect you and you will come out of the fire unscathed. In this article I am going to talk to you about a brass pot, known as kalasam, that is designed and used in the incredible ritual called Fire walking.

The brass pot shown in the pictures is used by the devotees of the goddess MARI AMMAN during the fire walking ceremony. The tradition is they keep the pot filled with the water and decorate it with turmeric paste and marigold flower garlands.  They sanctify the pot by keeping in few mango leaves and neem leaves. Such sanctified and decorated pot is called kalasam. The kalasam is placed on their head and held in position by their both hands and they walk on the fire. The ardent devotees, who had taken a vow to do penance in lieu of cure of a disease or fulfillment of a wish, walk on the fire to fullfil their vow. 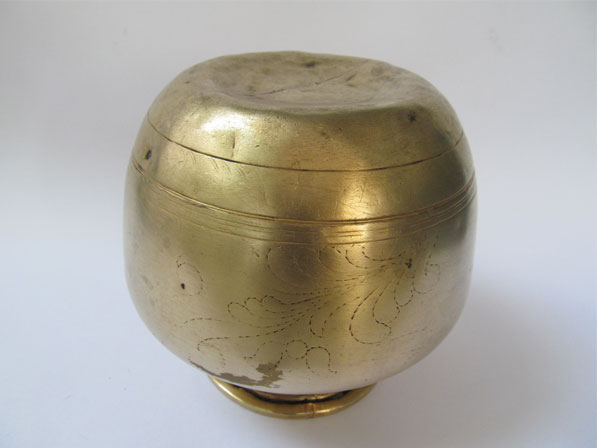 antique fire walking brass pot with depression for resting on the head. 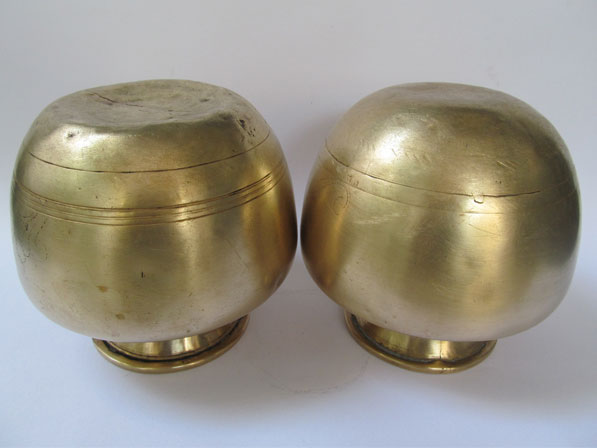 Two identical brass pots one with depression at the bottom and the other with the rounded bottom shape.

The design and shape of the  brass fire waking pot.

This handmade beautiful brass pot has a large belly, narrow neck and wide opening mouth. There is hand etched design around the body of the pot. There is a large dent or depression at the bottom of the pot. The dent is designed to snuggly hold the pot on the head of the devotee so that the pot remains stable and intact on the devotees head while he/she is performing the fire walking ceremony.

The code of conduct and penance for fire walking.

The devotees who have taken a vow to do fire walking wear yellow colored clothes all the time during the month of AADI and abstain from eating non-vegetarian foods, remain celibate, walk bare foot.  They wear a yellow cotton wrist wrap with a turmeric pod tied to it during the moth to remind themselves of their vow and from straying away. During the fire walking ceremony they wear a garland of marigold flowers and hold bunch of neem leaves in one hand.  Once the flag is hoisted in the temple near the place where the person resides, he is forbidden to leave his village or town till the culmination of the Mari Amman festival that is celebrated for 10 day. 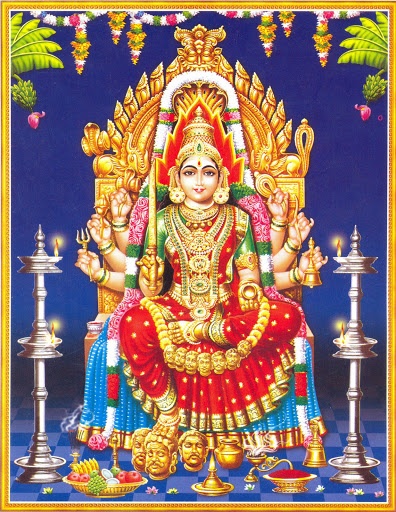 The female deity, Mari Amman is very popular in Southern India, especially in Tamil Nadu. She is the mother goddess of mainly rural areas of Tamil Nadu, Karnataka, Andhra Pradesh, and Maharashtra states.  Mari Amman is considered a reincarnation of goddess Parvati, the spouse of Lord Shiva. Mari Amma is the counter part of Shitaldevi of North India and Godess Manasa of eastern India. She is the mother goddess who brings rains to parched lands and thus life and prosperity.  She is also known to cure diseases such as small pox, chicken pox and cholera. There are huge temples for this deity in places like Samayapuram near Trichy, Erode, Madurai, Tirunelveli, Kanya Kumari in India and also abroad in places like Malaysia, Singapore, Sri Lanka, Thailand, US, UK.

During the Tamil month of AADI (roughly between July and August) temples of this Goddess celebrate a festival with great fan-fare, with many customs, rituals, and the most important of all is fire walking and car (big wooden chariots) festival. These rituals last for 10 days to pray and thank goddess Mari Amman for abundant rainfall, good heath and prosperity by the farming community in particular and the public in general.

On the last day of the celebrations, after the chariots are pulled and return to their starting points, after sun set, the worshippers perform the fire walking ceremony. They keep the brass pot (kalasam) on their head and walk bare footed over a pit which has burning coal and wood.  This fire walking is for a distance of 20 to 50 feet depending on the tradition of the temple. The dent in the kalasam is purposely made to allow the devotee to place it comfortably on his or her head and ensure that it is stable. Now a days devotees who cannot afford brass pots use steel pots for this purpose. Miraculously they are not harmed at all and they believe that since they have remained pious throughout the month, the mother Goddess has protected them from all dangers and will bestow them with all their hopes and aspirations in the coming days.  People who have not observed the fast or remained pious would not dare to even think of coming near the fire pit. 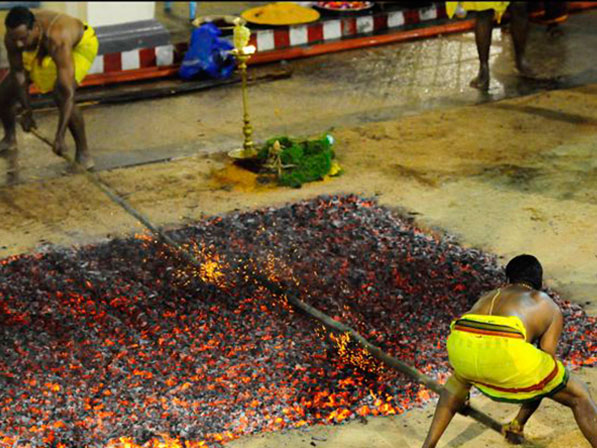 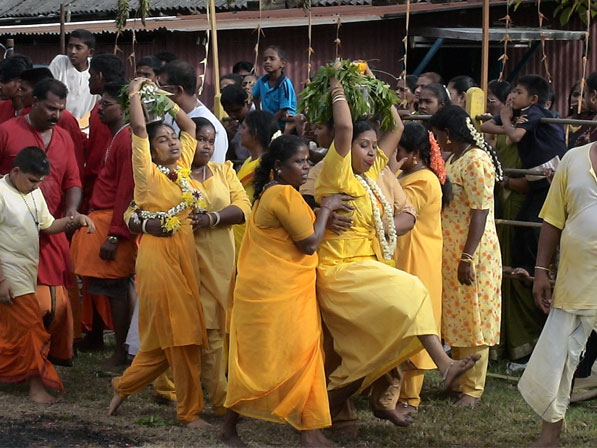 A fire walking procession proceeding to the fire pit holding pot (kalasam) on the head. 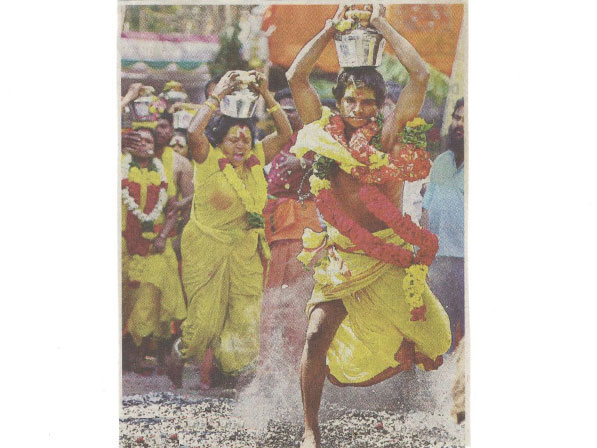 Both men and women participate in this ritual and even children are encouraged by their parents to observe the penance.  It is heart wrenching to see kids (boys and girls) to walk over the burning fire without any protection.  But, they smilingly walk over to the other side and are hugged by their parents with joy.

Some devotees do another forms of penance. Instead of walking over the burning fire, they carry a pot completely filled with hot burning wood and coal with their both hands, dancing to the music of nadaswaram and melam and reach the temple.  All along, common people pour pitcher full of water over the heads of these devotees to help them keep their bodies from getting exhausted and also to take their blessings

Some devotees also do penance by piercing trident (trishool) or vel to their cheeks, tongue, ears, stomach etc. The guilt feeling among the devotees for any wrong doing knowingly or unknowingly done is also a reason for them to do self-imposed punishment like impalement of skin and tongue, carrying fire pots with bare hands and flagellation. Astonishingly, they hardly feel the pain or experience heavy blood loss during piercing or while removing the objects.

It is a very unique custom to Tamil Nadu and has been in practice since centuries.  Modern views of rational thinkers who dwell in city would be that it is absurd, foolish and a form of superstition or blind faith.  But, the faith, trust and belief of the believers are growing in great numbers day by day. It is a mystery as to what kind of spiritual ecstasy they experience in undergoing such hardship.

There are more ceremonies that are associated with Mari Amman festival. One of such ceremony is MOLLAPARI. Women keep soaked pulses in cotton cloth to germinate overnight.  These sprouted pulses known as “MOLLAPARI” are then transferred to a vase containing mud and they daily sprinkle water to keep it moist.  By the 10th day the sprouts could reach up to 5 inches in height.  The sprouts symbolize the mother’s grace on their families and ensure good harvest in the coming days. The Mollapari is brought to the temple tank on the final day and immersed in the water. 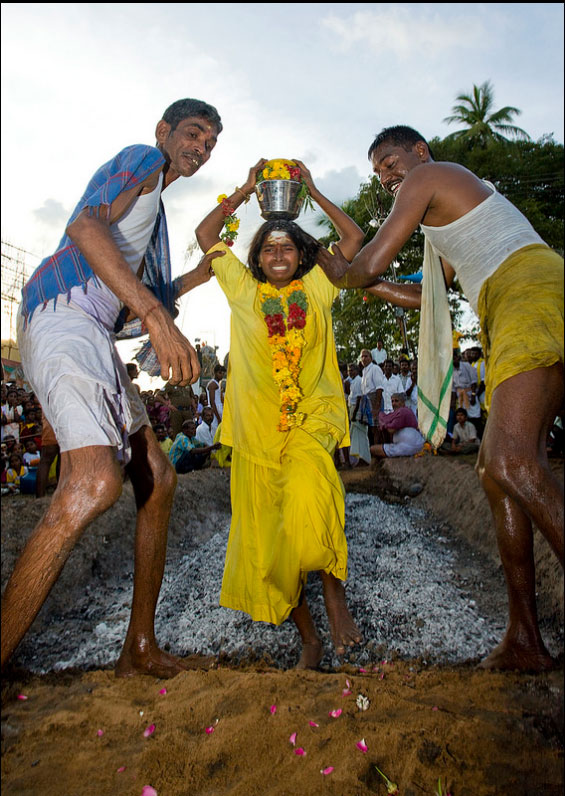 There is a legendary story about the Goddess Mari Amman.  There was a old small temple of Mari Amman in a village near Madurai which was frequented by many people from surrounding places and everyone had absolute faith in the powers of the mother Goddess.  It was a period when India was under the rule of the British.  One of the British Generals wanted to build a road after demolishing the existing temple for smooth and faster movement of British troops, which had to otherwise take a longer route to reach the cantonment.

The people vehemently opposed the idea and pleaded with the General to drop the project as it concerned their faith and belief. They warned the General about the powers of the Goddess and to not try her patience.  The General rubbished their warnings as irrational and proclaimed that he was not afraid of any stone figure at all.  The night before the temple was to be demolished; the General was inflicted with severe bout of small pox and high fever.  In the morning, when he looked at the mirror he was astonished to see his condition. He immediately summoned the battalion doctor.  The doctor came and tried every possible medication, but to no avail.  The condition of the General was getting worse and his fever was not subsiding.  He could not eat or speak. His energy was completely drained away.  He was sure that he would not survive for the next day.

One of his trusted Indian soldiers told him that this was the curse of the Goddess and that if he sincerely dropped the plan to demolish the temple and pray for forgiveness, the mother would not only save his life but also cure his disease completely.  The General agreed to the suggestion.  He was carried in a palanquin to the temple.  The priest of the temple immediately took him in front of the deity.  The General asked for forgiveness and promised not to touch even a single stone of the temple. The priest received divine instructions and accordingly the whole body of the General was wrapped in yellow colored clothes, covered with neem leaves for 3 days and on the 4th day he was given a bath.  After the bath, the small pox was completely cured and he was in his old health and personality. The General thanked the Goddess and promised to renovate the old temple and perform Kumbhabhishekam.  Accordingly, the temple was renovated and built in a grand manner and Kumbhahishekam was performed.  Even today the temple exists and the statue of the British General is kept at the entrance of the temple. 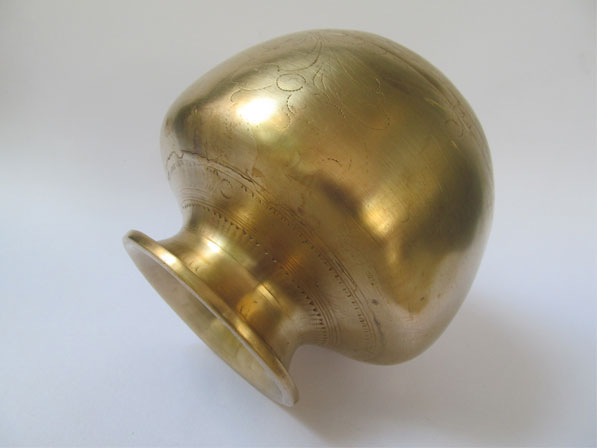 The picture showing the design on the antique fire walking brass pot.

It is a custom to keep neem leaves above the entrance of the homes of children or adults afflicted with small pox and even over their bodies. No allopathic medicines are given to such people and proper hygiene is maintained as people consider Mari Amman to have come to their house in the form of small pox for some reason.  The Tamil name for small pox is “Amman” (mother).  Relatives coming to see the patient also have to observe many restrictions such as taking daily bath, refraining from eating non-vegetarian food, alcohol, sex till the time the person is cured and Amman leaves the house.

Fire walking is generally considered as a trial of one’s will power and courage. It is a matter of mind over body. These weird rituals serve the purpose of  social unity and team spirit among the community members. Social scientists believe that the religious rituals that test extreme level of physical strength and mental stamina  serve as a bonding factor of the participants by aligning their emotional condition. The strong bondage developed by these intense sharing of weird experiences, prompted the corporate world to prompt their employees to undergo such experiences as fire walking for team building exercise. 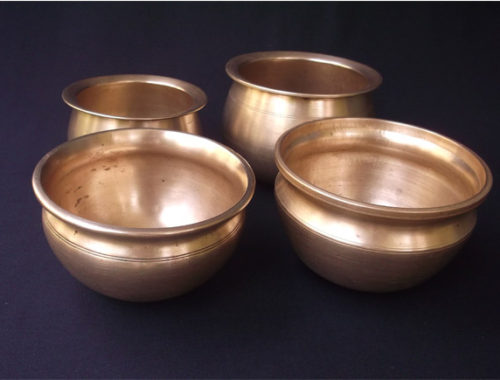 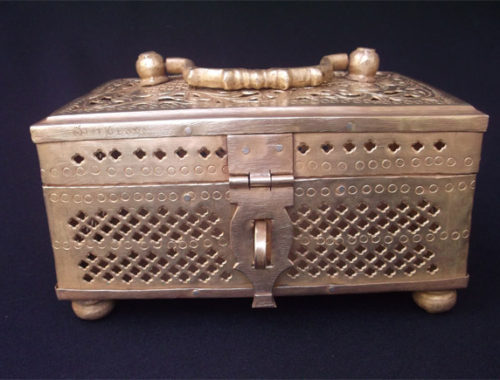 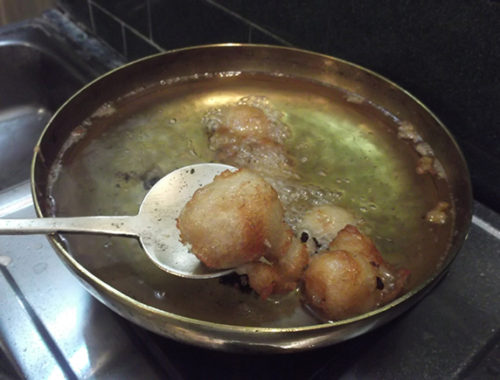